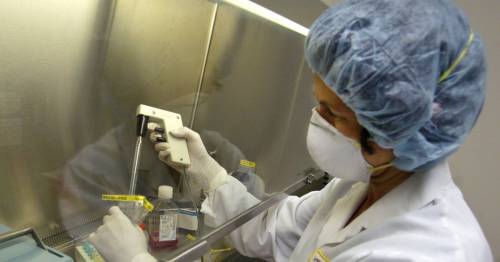 Scientists have confirmed the key symptoms of monkeypox after a case was today confirmed in the UK.

The patient is currently being given specialist care at a hospital in London after contracting the virus – which shares many similarities with smallpox – in Nigeria.

Experts have stressed that human-to-human transmission is rare, but said some people who have come into contact with the individual will be contacted as a precaution.

Cases in the UK are rare, with the viral infection – which was first found in humans in 1970 – most prevalent in parts of Western and Central Africa.

In most instances it causes a mild illness, with fever usually followed by a rash breaking out, usually on the face.

Most people recover within four weeks, medics said today, although the virus can cause serious illness in rare cases.

The first human case of monkeypox was confirmed in 1970
(

Monkeypox is a viral infection with several similarities to smallpox.

It was first discovered in a colony of monkeys in the modern-day Democratic Republic of the Congo in 1958, with the first human case confirmed in 1970.

In most cases it is a "mild self-limiting" illness and the majority of people recover within a few weeks, experts say.

Today the UK Health Security Agency (UKHSA) confirmed a case had been detected after contracting the virus in Nigeria.

The patient is currently in an insolation unit and being cared for at the expert infectious disease unit at the Guy’s and St Thomas’ NHS Foundation Trust, London.

The UKHSA has said the risk of transmission to the general population is low.

According to the Centers for Disease Control and Prevention, monkeypox has been shown to cause death in as many as 1 in 10 patients in Africa.

Patients experience fever before the rash breaks out, experts say
(

What are the symptoms of monkeypox?

According to the Centers for Disease Control and Prevention (CDC), there are seven key symptoms that can signal a monkeypox infection.

Many of these are similar to smallpox, although swellings to the lymph nodes are an indicator of monkeypox.

Within one to three days of the fever starting, a patient usually develops a rash, often beginning on the face then spreading to other parts of the body.

The virus has many similarities with smallpox, but rarely passes between humans, experts believe
(

"The main difference between symptoms of smallpox and monkeypox is that monkeypox causes lymph nodes to swell (lymphadenopathy) while smallpox does not. The incubation period (time from infection to symptoms) for monkeypox is usually 7−14 days but can range from 5−21 days."

How can you catch monkeypox?

Scientists believe that human-to-human transmission is "very uncommon", but it can be spread by touch and through droplets.

In most cases, experts say, the virus is caught from infected wild animals – usually rodents.

People bitten by infected animals, or those who touch their blood, body fluids, spots, blisters or scabs, can become ill.

And it may also be possible to catch monkeypox by eating meat from an infected animal if it has not been properly cooked.

In rare cases where it is spread between people, latest NHS guidelines state that the main sources of infection are:

It is mostly passed to humans by animals including rodents, experts believe
(

Are people who came close to the patient being contacted?

Health chiefs say that those who have been close to the individual with monkeypox are being contacted as a "precaution".

The UKHSA said in a statement today: "As a precautionary measure, UKHSA experts are working closely with NHS colleagues and will be contacting people who might have been in close contact with the individual to provide information and health advice.

"This includes contacting a number of passengers who travelled in close proximity to the patient on the same flight to the UK.

"People without symptoms are not considered infectious but, as a precaution, those who have been in close proximity are being contacted to ensure that if they do become unwell they can be treated quickly.

"If passengers are not contacted then there is no action they should take."

What have UK experts said today?

UK health officials have stressed the need for calm, and emphasised that monkeypox rarely spreads between people.

The risk to the general public has been described as "very low".

Dr Colin Brown, Director of Clinical and Emerging Infections, UKHSA, said: "It is important to emphasise that monkeypox does not spread easily between people and the overall risk to the general public is very low.

"We are working with NHS England and NHS Improvement (NHSEI) to contact the individuals who have had close contact with the case prior to confirmation of their infection, to assess them as necessary and provide advice.

"UKHSA and the NHS have well established and robust infection control procedures for dealing with cases of imported infectious disease and these will be strictly followed."

"This is a good example of the way that the High Consequence Infectious Diseases national network and UKHSA work closely together in responding swiftly and effectively to these sporadic cases."

According to government guidance, "prevention of transmission of infection by airborne and contact routes is required. Appropriate respiratory isolation is essential for suspected and confirmed cases."

Previous : Mum who refused Covid jab ended up in a coma after giving birth to first baby
Next : SAS recruits ‘loyal’ Jack Russell pooches in fight against global terrorism