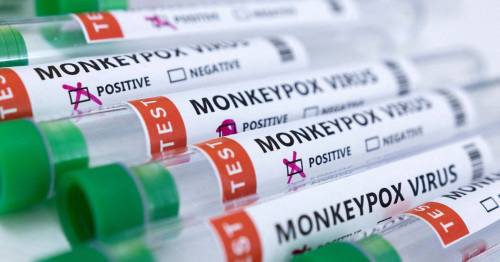 The number of monkeypox cases in the UK has risen by 219, officials have confirmed.

London remains the epicentre of England's outbreak, the latest figures show, with 498 infections linked to the capital.

The South East and North West have the next highest figures.

So far 99 per cent of those diagnosed with the virus are male, with just five confirmed female cases, the UKHSA said in its latest daily update.

The number of confirmed monkeypox cases is nearing 800, officials said this afteroon
(

The number of confirmed cases by region are:

The agency said the location of 142 cases is still under investigation.

In this afternoon's update the UKHSA said: "Cases of monkeypox infection were confirmed in England from 6 May 2022.

"The outbreak has mainly been in gay, bisexual, and men who have sex with men without documented history of travel to endemic countries."

The virus, which was first found in humans back in 1970, has been detected in 35 countries where it is not endemic in the past month.

Monkeypox has been linked to 66 deaths in Central and West Africa, where it is classified as endemic, since the start of the year.

The number of monkeypox cases has risen shaply
(

It can also be spread via contaminated objects such as linen and soft furnishings.

Guidance issued by the UKHSA urges people to try and eat and sleep in a different room from those they live with if possible.

It says: "Where the use of a separate room isn’t possible, cases should avoid physical contact and keep at least 3 steps (1 metre) away from all household members.

"It is particularly important that they avoid close contact with young children, pregnant women and immunosuppressed people as they may be at higher risk of serious illness."

Those diagnosed with monkeypox and highest-risk contacts should isolate at home, the guidance says.

Dr Susan Hopkins, Chief Medical Advisor at UKHSA, said: "Self-isolation is an important measure for protecting others from monkeypox.

"Staying at home and doing all we can to avoid close contact with other people in the household will prevent the spread of this virus.

"We know that self-isolation is not easy for some so it’s important that people ask for support if needed."

Previous : Boy, 12, dreading school after bullies ‘beat him and tried to steal his shoes’
Next : Puppies handed over by ‘animal hoarder’ desperately need new homes