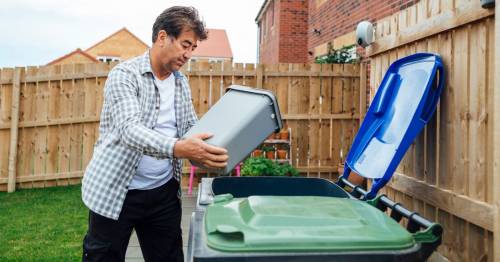 Money Talk: ‘My neighbour keeps using my bin to fly-tip, are they breaking the law?’

Someone using your wheelie bin without permission is one of those things guaranteed to get Brits hot under the collar.

It can be particularly annoying to take your rubbish out only to find your bin is already full of a strangers' bin bags.

While chucking the odd bit of litter into a stranger's bin is unlikely to cause offence – in fact, it's doing the community a service – there is something about someone using your bin like a skip that can rub us up the wrong way.

But using someone else's bin is more than just unneighbourly – it's actually illegal.

If you've got a money dilemma that you don't know how to handle, or a financial query that you'd like an opinion on, email us at: mirror.money.saving@mirror.co.uk

One Mirror reader has emailed in to ask: "My neighbour keeps using my bin to dump their rubbish without permission.

"I know it's him because I've caught him doing it and asked that he stop, but he refuses to apologise and now seems to be doing it on purpose to get under my skin.

"I can't put the rubbish back in his bin, because that is always full.

"What are my rights in this situation please, or do I have to lump it?"

Lawyers say that putting rubbish in someone else's bin is illegal, and that the council can also fine the perpetrator.

Solicitor Paul Britton, of the law firm Britton & Time, said: "Dumping rubbish in someone else's bin is a criminal offence as it is the uncontrolled disposal of waste which we call fly-tipping. All types of waste can qualify as being fly-tipped, from general household waste to hazardous substances and material.

"Fly-tipping is criminal activity that can cause serious pollution of the environment. In some case it may be a risk to human health and almost certainly harms wildlife.

"If the owner of a bin can identify the fly-tipper, they sue them and claim the costs incurred (including reasonable removal, reinstatement and legal costs) directly from the fly-tipper.”

Hannah Costley, a solicitor in the crime and regulatory team at Slater Heelis, said: “Fly-tipping is investigated by Local Authorities and the Environment Agency and enforcement can be taken by both organisations.

"Local authorities can issue fixed penalty notices between £150 – £400. Fly-tipping cases that are dealt with in Court may result in the issuing of an unlimited fine or a custodial sentence of up to five years.”

Previous : Dog with ears like Dobby from Harry Potter desperately searching for new home
Next : Passport website CRASHES as Brits fear they will have to cancel summer holidays