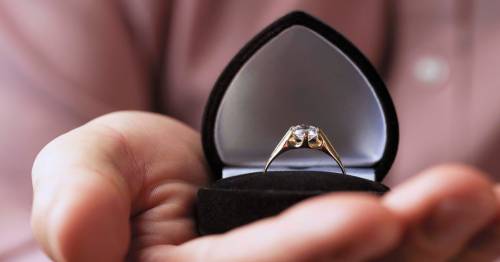 Money Talk: ‘Do I legally have to give the engagement ring back if we split up?’

Today is national divorce day, the point of the calendar when married couples are most likely to start formally splitting up.

Divorce can be amicable, but sadly can also be the exact opposite, with entrenched couples falling out even further when they start dividing up their possessions.

Items you'd assume would never be argued over are engagement rings .

But nothing could be further from the truth – and the law says that, in some situations, people getting divorced do actually have to hand back these rings.

One Mirror reader emailed in to ask: "I am getting divorced after a long engagement, and my fiance is asking me to give back my engagement ring.

"He says it is a family heirloom and he wants it back in case he gets engaged again.

"I'm disgusted he would even ask – he gave it to me as a gift and it's pretty cruel that he's asking for it back so he can give it to some other woman.

"Frankly I'm still debating whether I want to keep it at all, but surely the choice is mine what happens to this ring – not his?"

Have you got an unanswered tricky money question? Message mirror.money.saving@mirror.co.uk

Morally you might well think so, but unfortunately the law is clear – and you have to give this ring back.

Normally in a divorce any jewellery is yours to keep, regardless of which spouse bought it.

That has been the case ever since 1882, when the Married Women's Property Act ruled that women owned jewellery given to them by their husbands.

The norm before 1882 was that jewellery and engagement rings given by husbands to their wives were not ultimately theirs, and could be given back to the husband after divorce.

Being gay at the time was of course illegal, and only straight men and women could be married in the UK before 2014 .

Nowadays, most people would get to keep their engagement ring after a divorce, if they want to.

That is because the Law Reform Act 1970 says these rings are an "absolute gift" and so do not have to be returned if a couple separate.

But there is a bit more to the 1970 law, and that is sadly that applies here.

The law says: "The gift of an engagement ring shall be presumed to be an absolute gift; this presumption may be rebutted by proving that the ring was given on the condition, express or implied, that it should be returned if the marriage did not take place for any reason."

Normally that almost never happens, as it would involve some sort of written agreement beforehand.

But if an engagement ring is a family heirloom, that changes everything – and it must be given back if you are asked for it.

Law firm Anthony Gold's website said: "If an engagement ring is a family heirloom then it is an implied condition that it is not an absolute gift but conditional upon the marriage taking place.

"This means the engagement ring would have to be returned to the man if the wedding was called off and he can prove the ring was his family heirloom."

Previous : Team GB athletes ‘told not to take their phones’ to Winter Olympics over spying fears
Next : Cold Weather Payments – all the postcodes that qualify for a £25 discount so far