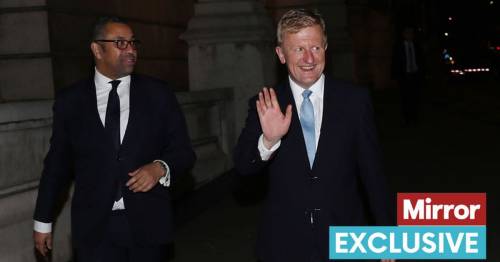 Boris Johnson rattled his donation tin at a lavish fundraising dinner in a bid to bolster the Tories' depleted campaign war chest.

Super-rich donors paid up to £15,000 a table for the chance to rub shoulders with senior cabinet ministers – who left the event early in order to vote through plans to make the poor pay more for social care.

And the Mirror understands the Prime Minister shared a table with billionaire property tycoons David and Simon Reuben.

The India-born British businessmen were named the second richest family in the UK by the Sunday Times Rich List in 2020, with a fortune of £18.6 billion.

The brothers, along with Simon's daughter Lisa and David's son Jamie have handed a combined £882,104 worth of donations to the Conservative Party since 2008.

Last month, the Premier League approved the takeover of Newcastle United by a consortium which included Reuben Brothers, the family firm, and the Investment Fund of Saudi Arabia.

And today HMRC announced it was moving 9,000 staff to a Newcastle office complex being developed by Reuben Brothers.

There's no suggestion of any wrongdoing on the part of the Reuben family.

The annual Winter Party – formerly known as the Black and White Ball – was brought forward by two months to Monday night after a slump in donations during the Covid-19 pandemic.

But a Tory insider suggested the bash had been moved to November after the party had been unable to hold their usual Summer fundraiser earlier in the year.

Donations to the party slumped from £55m in 2019 to just £17m, with party treasurer Alan Mabbutt admitting in August that "income was significantly affected in the year with the cancellation of all but one of our annual fundraising events."

One major Tory donor told the Mirror some backers had stayed away because the "ostentatious consumption" of the bash was "not a good look" when so many people were struggling with the cost of living.

The donor also suggested that the Prime Minister's woes in recent weeks had led to some long-standing donors questioning their ongoing support.

"Everyone in No 10 has lost the plot. Where are the people around Boris who are making sure things happen as they should? They're just not there," they said.

One Tory insider who did attend Monday's bash told the Mirror it been "boring."

Some key party Tory party figures were taken aback not to have been invited to the glamorous event.

"None of us likes going very much," they claimed. "But it's surprising more of us weren't roped in".

Nigel Adams leaving the do
(

Top Tories were seen dashing away from the V&A on Monday night, in order to return to the Commons to vote through changes to the social care cap which will leave poorer homeowners in the North worse off.

Ministers were given strict instructions to return to Westminster ahead of a knife-edge vote – which passed by a majority of just 26.

The social care change will save the Treasury £900m a year by making people who get state funding take longer to reach an £86,000 lifetime cap on care spending.

The change means only the amount those people pay themselves – not any help they get from their local council – will count towards the cap.

Meanwhile the event saw wealthy party backers splash cash on cosy dinners and days out with cabinet ministers in a notorious access auction.

An hour playing cricket with Rishi Sunak sold for £35,000 – while a karaoke session with Foreign Secretary Liz Truss raised £22,000.

One bidder pledged a £25,000 donation for dinner with party-loving Housing Secretary Michael Gove.

Ministers Helen Whately and Suella Braverman outside the party
(

In previous years, the Party has auctioned off cosy tennis games and nights out with successive Prime Ministers to Lubov Chernukhin, a Russian banker whose husband is a former Putin ally.

Ms Chernukhin, the biggest female political donor in UK history, has given more than £1.6 million to the Tories – and paid £45,000 for a tennis match with Boris Johnson at 2020's ball.