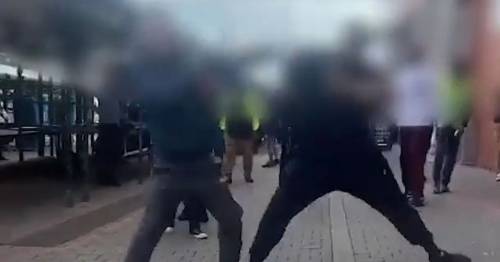 Two men have been caught on camera as they began a rolling fist fight in the middle of Birmingham Markets.

The pair was spotted by passersby as they began trading blows as leaving shoppers around them in shock.

In the footage, the two young men skirt around each other in circles close to the Bullring before trading punches.

At one point one manages to grab the other, before knocking his sparring partner's baseball cap off his head, Birmingham Live reports.

They are being followed along the street as they keep throwing punches and a crowd pushes them further and further along.

They were caught on camera fighting
(

The astonishing broad-daylight brawl took place in front of horrified families and commuters, as well as people wearing high-vis jackets who appear to have been working nearby.

One bystander in a white top is seen urging them stop and even shouts to 'leave it man, leave it' before trying to calmly intervene.

He managed to separate the pair, but only for a short time.

The men were fighting as they walked
(

A female can also be heard saying 'stop fighting' as the brawl continues.

While another man urges the fighters to 'keep going', as he seemed to be enjoying the bizarre spectacle.

The fighters were pushed along by the crowd
(

The shocking scenes happened in front of shoppers and next to a row of empty stalls at around 2pm on Wednesday (June 22).

It is not clear what caused the fight to began.