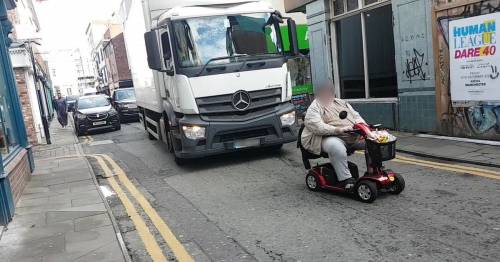 A mobility scooter driver held up “more than 10 cars” by refusing to pull over in a one-way street as he waited for his chippy tea to be brought out, prompting honks from “irate” motorists.

Bizarre footage of the incident shows the hungry customer parked up in the centre of the road in Manchester city centre last Friday, blocking a large truck and the cars behind from passing.

Multiple people can be seen attempting to help or intervene, only for the stubborn man to repeatedly shout “I just want the fish and chips that I've paid for”.

Passerby David Williams had presumed the battery on the man's scooter was flat so went over to see if he could help but was told to “back off” by the scooter user.

In the clip, the furious customer bellows at anyone who urges him to move, despite holding up traffic for several minutes while waiting for his fish and chips order to be brought out to him.

He then becomes embroiled in an explicit slanging match with furious drivers, branding them “f***ing low lives” and threatening them with “the law”.

Even when his meal finally emerges, he refuses to budge, even telling a frustrated policeman who stops on his motorbike that “as soon as he gets the chance he'll be out of the way”.

The copper then proceeds to escort him down the road while warning he's “causing chaos”.

"You can hear the horns going, the guy in the lorry behind was shouting but I couldn't hear what he was saying,” he said.

"Everyone was getting irate, not knowing what was going on.

"I was on route from an interview to where I live and I just happened to see this guy in the distance sitting in the middle of the road in a wheelchair. I thought he must have broken down or his motor had gone.

"I came to his aid initially but he shouted at me so I backed off.

"There was traffic behind him so I thought there must have been some reason why he was stuck there in the middle of the road.

"I got closer and realised he was waiting for his fish and chips of all things, at 11.30 in the morning.

"He paid for his fish and chips and was waiting for them to come out.

"I just couldn't believe it. I was gobsmacked he'd stopped in the middle of the road with a [lorry] behind him which could quite easily have pushed him aside. There were more than 10 other cars behind him."

As Test and Trace general assistant David, 54, stood at the roadside in disbelief, he claims the bloke was there for more than five minutes while various onlookers approached him to warn of the commotion.

"It's quite a narrow street, it's one-way, so if there's a blockage at the front you're pretty stuck,” he said.

After more than three minutes filming the heated arguments, David then spotted a uniformed officer pull up at the side of the road while someone asked “have we got a protest going on here?”.

Upon realising the wheelchair user is sat in the middle of the narrow side street, he warmly says: “right, let's go, you're causing chaos young man” before putting his thumb up at the lorry driver in thanks.

David said: "A policeman on a motorbike spoke to him and the man said 'I'm waiting for my change'. The chap came out from the chippy with his change then off he went down the road followed by the local constabulary. He was making sure he kept going.

"You don't see that very often."

Greater Manchester Police said they were too busy to comment.