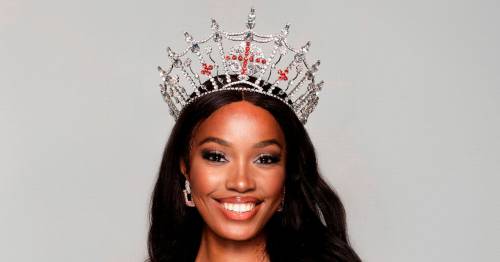 As former Miss England Dr Bhasha Mukherjee placed the crown on my head, I was overcome with joy, hardly believing I’d won.

After the long months of lockdown, when it felt like everything fun had been postponed, it was incredible to be there in person, celebrating my victory with my fellow beauty queens.

It was a far cry from when I found out I’d qualified for the Miss England final, by winning Miss All African Colours, in February 2021.

Because of the pandemic, everything had to be done virtually. It was surreal learning I’d won by receiving my sash and crown from my grandmother, rather than going to a fancy venue dolled up to the nines.

When I was younger, pageants weren’t on my radar. I’d heard of shows like Miss Universe, but didn’t really see myself in them. In 2019 I was invited to join a Miss England heat, but left it on the back burner.

It wasn’t until summer 2020, after I’d graduated in genetics from Sussex University, that I started googling pageants to find out more.

I saw the Miss England organisation had introduced Miss All African Colours, in the wake of Black Lives Matter. It’s specifically for minority ethnic women in England, and I thought entering would be an ideal way to be representative of the diversity in this country.

Winning hadn’t crossed my mind, so to take the Miss England crown and therefore compete in the iconic Miss World competition was incredible. Sadly, some people didn’t see it that way – the director was getting calls and emails to say, “This is not Miss England.”

It’s not the first time I’ve encountered racism and it won’t be the last. I knew there would be a backlash whenI won, simply because I’m Black and my heritage is Kenyan. But the way I cope with it is by thinking I now have a platform to be a force for good.

One cause that’s particularly close to my heart is combatting domestic abuse both here and in East Africa. I have experience of a toxic relationship and I want to help other women find the help and support they need.

In my early twenties, when I was a student at Sussex University, I started dating someone. We’d been together for six months when suddenly he changed.

It’s hard to verbalise exactly what happened. There was a shift in personality and he turned into a Jekyll and Hyde-type character. Looking back, there were probably warning signs, but like so many other young women, I didn’t know what to look out for.

The cycle of abuse started with gaslighting, manipulation and angry outbursts. I was in denial about what was really happening. It was only after I got out that I could see it for what it was.

Rehema is proud to celebrate her heritage
(

Rehema when she was at uni

But sadly our break-up in early 2019 wasn’t the end. That was when the stalking started. He’d call 50 times an hour and send unwanted gifts or flowers.

Then he started turning up on the doorstep, or following me around campus. I’d be walking to a lecture and he’d be there across the street. Once, he followed me on the train to my home town of Luton and I had to call the police.

It was relentless behaviour, in order to get me to react or respond, and warnings from the police didn’t make him stop.

While he’d been aggressive in the relationship, he was never violent, but this felt different. When someone has nothing left to lose, what else can happen? I was worried he’d try to hurt me.

Because of the pandemic, court proceedings took a long time, and his harassment continued. It took two years from me first reporting his behaviour in spring 2019 to him being in court in April last year.

It didn’t go the way I thought it should. He just got a slap on the wrist and a 12-month community order. The judicial system is not doing enough for women who have faced domestic abuse.

It sends a message that emotional and psychological abuse is not taken as seriously as physical abuse.

Hard to move on

I was also unhappy about only obtaining a two-year restraining order. Why not longer? There’s no need for us to contact each other.

I am very aware that when it ends, I’ll be contacted by him again. It will be a cycle of me returning to the court to get a new order and hoping I’ll get a longer one next time.

He’s already broken this current restraining order by contacting me on social media. I thought he should have been sent to prison for that, but he wasn’t. He just got a fine and that was it.

It’s become second nature for me to look over my shoulder, something I have to deal with every day of my life. That isn’t right.

It’s hard to move on when you’re in this situation, but I now have a wonderful partner who has been an amazing support.

The work I’m doing now with Women’s Aid and Miss England helps me manage what happened. I’ll never get over it, but it’s cathartic to talk to other women.

I tell them it’s OK to talk about it, and to try to get out, to seek help by speaking to friends, family, or reaching out to Women’s Aid via its message service, or other domestic abuse charities’ helplines.

My message would always be you’re not alone, however isolated you feel – there is help out there.

I’m also helping spread the word further afield by working with a charity called One Woman At A Time, which works in an area in Kenya where female genital mutilation (FGM) is still practised. Sadly, young women are still losing their lives or running away from home because of this.

I’ve also spoken to schoolkids in the UK who come from an East African background, so that they’re better informed about what FGM is and how to get help if they need it.

The fact I can talk about these serious issues shows just how much beauty pageants like Miss England have moved on. It’s no longer about objectifying women, but showcasing “beauty with a purpose”, and we all have to raise funds for charity as part of the competition.

Of course, there’s a fun side to it all as well. I’ve become an ambassador for Cetuem and its British-made skincare products, I’ve been able to travel around the world, and it was an honour to take part in Miss World in March [where Karolina Bielawska from Poland received the crown].

But the best bit for me is being able to show other young Black or Asian women here that it’s possible to celebrate both England and our amazing heritage.

Previous : UK weather: Brits set to bask in 27C mini heatwave this week
Next : Check out the cost of everyday ‘essentials’ – compared to how often they are used