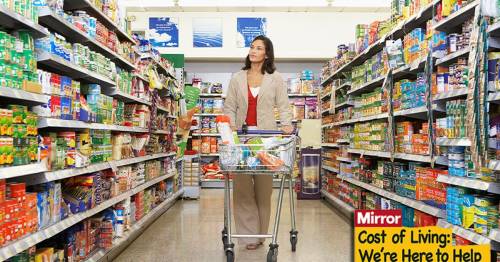 Nearly two million people are skipping meals after a jump in food prices, an exclusive Daily Mirror survey has revealed.

It also found one in four has responded to higher prices by eating food past its best-before date.

The poll comes as one charity said it had heard from some people who now considered a jacket potato a luxury because of the cost of having the oven on for so long to make it.

Along with energy, a sharp rise in the cost of food has been a major factor in soaring bills for millions of families.

Food and drink price inflation hit a near decade high of 5.9% in March.

But experts warn it is likely to top 7% in the coming months because of a host of factors, from labour shortages to the war in Ukraine.

One analyst told the Mirror he thought food inflation could jump to between 8% and 12% by the summer.

That would add around £400 to the average family’s annual grocery bill.

A survey for the Daily Mirror by Deltapoll of 1,610 adults online between April 21 and 23 found an overwhelming 81% had noticed their food bills jump in the past three months.

As a result, six out of 10 have made changes such as cutting back on luxuries, buying less food and switching to supermarket own brands.

Just under three in 10 people who had made changes said they were now using out of date food.

And 13% said they were now going without meals – equivalent to 1.8 million people.

The survey also asked which appliances around the home people are using less to save money. After heating (57%), about a third said they were running the washing machine and dryer less, or not at all.

Meanwhile, 23% said they were using their oven less, and 5% have stopped using it completely.

Adam Scorer, chief executive of the charity National Energy Action, said: “This cost of living crisis affects everyone but it is already ruining the lives of people on lowest incomes.”

Joe Twyman, co-founder and director of Deltapoll, added: “In a variety of different areas, a very large proportion of the population has experienced rises in costs their cost of living.

“For many, this impact has been significant, both in terms of the changes in behaviour it has produced, but also in the impact on mental health.”