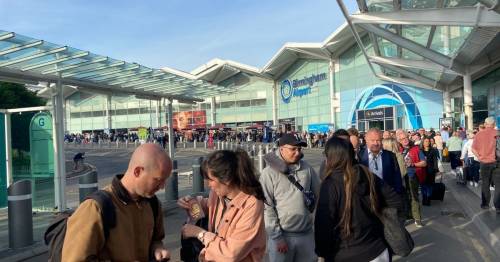 Holidaymakers are facing travel misery again this morning after reports of a mile long queue at Birmingham Airport with some forced to miss flights.

The airport has been plagued by issues in recent weeks but just a day after passengers thought the worst disruption had eased, travellers have been taking to social media to vent their frustrations.

One traveller posted: "Queue is about one-mile long – Literally," while another added: "The queue this morning is a disgrace.

"Why after days of this have you not sorted it?"

A different passenger said airport staff called him through the queue too late and he missed his flight to Holland.

A Birmingham Airport spokesman told Birmingham Live : “Queues were long but managed and moving this morning as we helped many of the more than 14,000 customers booked to fly out of BHX today (Thursday, May 12).

“As always, we ask customers to arrive at the airport at the time your airline advises – and to help us help you keep queues moving by removing any liquids, gels, pastes and electrical items from your bags before our security x-ray scanners."

Tweeting at 5.30am this morning, Kirsty Smith said: "Unbelievable. We followed your advice and got here just 2 hours before and were now queueing with hundreds of others in a security line which is taking forever – not impressed at all #whatawaytostartaholiday."

Sukh Khatkar, who missed his flight from Birmingham to Amsterdam after being stuck in the security queue, said he has "never seen queues this bad."

Sukh, 26, from Handsworth Wood, said: "I’m a regular flyer who visits my fiancé in Amsterdam at least every six-weeks and I have never ever seen it this bad.

"They were calling out flights who were boarding soon to direct people to the express lane. But for some reason they didn’t call my flight until the sign shows 'final call for boarding'. Was in the queue for around 70-mins."

Sukh was due to fly with KLM, but his new flight will be with Flybe at 10.20am today.

"I will be asking them to reimburse me," added Sukh. "I used to get here an hour before take off to go to the check in desk and go through security. Never had any issues.

"After seeing the news recently. I thought being here an hour-and-a-half before take off should be sufficient to get through only security as I had checked in online – but it’s clearly not."

Previous : Mum who thought she had dementia for 29 years discovers she has Lyme disease
Next : Kim Jong-un tests new missile – just how dangerous is the situation in North Korea? – World News