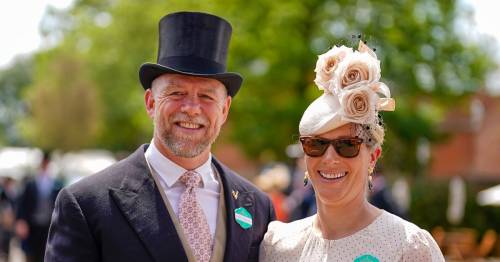 The unprecedented double royal christening of Princess Eugenie and Zara Tindall’s sons may have been a private event.

But Zara’s husband Mike Tindall has shared some adorable details about the big day, which saw the babies baptised in front of their great-grandmother the Queen.

The ceremony, which took place at All Saints Chapel in Windsor Great Park, was held in honour of Eugenie and husband Jack Brooksbank’s son August and Zara and Mike’s eight-month-old Lucas.

And speaking on his podcast, The Good, The Bad & The Rugby, former rugby player Mike revealed how everyone attending had a “lovely day”.

He told co-presenter Alex Payne: "I had a great weekend, a great few days.

Mike Tindall with his wife Zara
(

"We had the christening on Sunday, it was lovely. It was a lovely day."

Alex then asked Mike if young Lucas had enjoyed his dunking in the holy water when he was christened.

And Mike revealed: “He did actually. I took him swimming in the morning, I think I readied him for it, he was quite looking forward to it.”

The Queen attended the christening ceremony on Sunday after she pulled out of a string of public events in recent weeks.

Zara Tindall arrives for the joint christening on Sunday
(

Pictures showed her being ferried away from the Berkshire chapel, with her vibrant lime green hat in view.

The christening was led by Canon Martin Poll, who is chaplain to Great Windsor Park and took place in the private Grade-II listed church which forms part of the Royal Lodge house.

It is thought it was the first time two royal babies were christened together.

Zara opted for a black outfit and dangling pearl earrings as she drove herself to the venue. Mike, 43, arrived in a separate vehicle dressed in a blazer.

On Monday, a day after the christening, the sad news was revealed that Jack’s father, George, died just days before the ceremony.

The 72-year-old suffered from Covid last year and had been unwell for some time.

A royal insider told MailOnline : "George had been in hospital with Covid and had not been the same after that.”

While another said that it was "wonderful" for George to have been alive to see nine-month-old August born in February.

Previous : At least 31 migrants drown in English Channel in desperate bid to reach the UK
Next : Ecuador to administer COVID-19 booster shots to general population in 2022