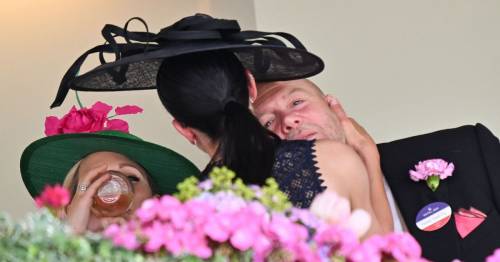 Mike Tindall and Zara were pictured giggling and play fighting in the sunshine at Royal Ascot as TV presenter Kirsty Gallacher made the couple squirm.

Ms Gallacher, 46, was seen laughing and joking with the pair after playfully grabbing Mike Tindall's face as they enjoyed a day at the races together.

Mike and Zara joined Princess Anne, 71, for a gloriously sunny day she led the carriage procession on the third day of the races.

Despite hopes the Queen may make an appearance at Ascot on Thursday as her horse Reach For The Moon was racing in the Hampton Court Stakes, it was confirmed around Thursday lunchtime that Her Majesty would not be attending amid her ongoing mobility issues.

The hotly-tipped favourite was a short price for the Hampton Court Stakes, but he was outdone by Claymore (7-1). Ridden by Adam Kirby, the winner led and was around a length ahead as he entered the final straight.

Reflecting on Reach For The Moon's second place, Dettori said his horse underperformed on the big occasion.

“I said to John (Gosden, trainer) that I wasn’t very happy at the three (furlong pole), then I got serious at the two and I managed to get my head in front – and then the last furlong I didn’t finish.

“It could be numerous different things – the ground, the trip – I don’t know. But he didn’t run his race."

The Queen would typically attend all five days of the races at Ascot, which is believed to be one of the events she most looks forward to each year, however Her Majesty has attended less public events over recent months due to mobility issues.

Her Majesty issued a message to racegoers on the first day of the event.

Zara and Kirsty enjoy a laugh
(

A statement from the monarch included in the race meeting’s programme read: “I am delighted to welcome you to the first Royal Ascot with a full attendance since 2019.

“After the challenges of recent times, this year's Royal Meeting provides a long-awaited opportunity for supporters of racing from all over the world to come together for five days of outstanding sport.

“Once again, it is thrilling that horses from around the globe have travelled to Royal Ascot to compete at the highest level.”

Mike and Zara take a selfie
(

She also referred to Queen's Green Canopy launched last October, a tree-planting initiative which aimed at creating a lasting tribute to the monarch on the year of her Platinum Jubilee.

She said: “I have been most grateful for the continued kindness shown to me by the racing community.

“In my Platinum Jubilee year, I was interested to learn that in support of The Queen's Green Canopy initiative, Ascot Racecourse and the Crown Estate have planted 70 oak trees in Windsor Great Park, each of which is linked to a local school.

“I hope you all have an enjoyable and memorable time, and I wish connections of the horses running this week the very best of luck.”