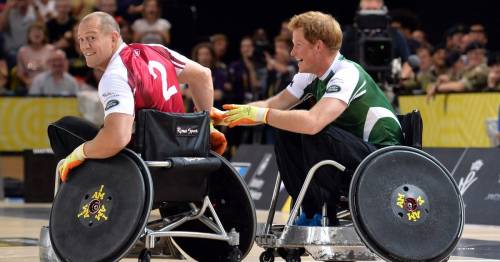 Most people try to keep any fiery comments about their other half's family to themselves at the occasional family reunion.

But not for Mike Tindall, who branded Prince Harry a 'b***end' during the Platinum Jubilee.

Now a spotlight is on the ex-England rugby star, 43, who is married to Princess Anne's daughter Zara, 41.

His antics during the Platinum Jubilee left people in stitches – as he modelled Zara's fascinators and shared cheeky photos on Instagram.

But it seems all was not running as smoothly behind the scenes – as Harry and Meghan made their first appearance alongside the Cambridge's since they quit the monarchy for a new life in the US two years ago.

It was the first time they were all together since the Duchess of Sussex accused her sister-in-law of making her cry over bridesmaids' dresses in an interview with Oprah.

Drama at the Jubilee

The 43-year-old was overheard dubbing the Duke of Sussex's behaviour as that of a 'b***end', the Daily Express reported.

He made the jab at a reception held after the Platinum Party concert at Buckingham Palace on Saturday night.

Prince Harry and Meghan Markle didn't attend the event – or any other celebrations publicly – apart from a thanksgiving service at St Paul's cathedral the day before.

The couple stayed low-key during the four days of celebrations – but it seems like their antics caused drama behind the scenes.

After the service, a body language expert told the Express that Mike Tindall could be seen avoiding chatting with Prince Harry

As the rows of royals exited, Zara could be seen beside her husband waiting by the exit to talk with those leaving the building.

Footage shows them then approached by the Duke and Duchess of Sussex, who animately chatted with the Queen’s granddaughter.

But her husband appears to visibly avoid speaking with Prince Harry and Meghan throughout the conversation, as he strikes up a separate chat with David Armstrong-Jones, Earl of Snowdon and the late Princess Margaret’s son.

Prince Harry and Meghan then move away from the Duke’s cousin towards the steps of the Cathedral, without acknowledging the ex-rugby union player.

Speaking to Express.co.uk following the service, body language expert Judi James suggested that Mike’s bond with William may have caused the divide.

She added: "Zara looks happy to chat and even turns fully to talk to Harry here, who is looking anxious and keen to get into his own car.

"Mike though remains facing forward, looking about and holding his order of service up with a look of awkwardness.

"In the end he talks to Viscount Lindley, who turns his own back on Harry, cutting the two men off from Zara’s conversation with Harry.”

Harry and Meghan were spotted through a window at Horse Guards Parade during the Trooping of the Colour but did not make a public appearance at the event.

Harry did not attend the Duke of Edinburgh's memorial service last month with the rest of the royal family. His decision to stay away had come amid his legal battle against the Home Office over his police security while he is in the UK, which is continuing.

Lawyers for Harry have said that he feels "unable to return to his home" with his family due to safety concerns.

Mr Tindall has previously joked that members of the Royal Family would like to “throw a few punches” at the Duke of Sussex.

He made the comments during A Question of Sport Live at the London Palladium back in September 2021.

He was joined by former England rugby player Matt Dawson, who recounted a night out with Prince Harry and ex-teammate Iain Balshaw in Sydney in 2003.

Royal expert Richard Eden said Balshaw and Tindall thought it would be “amusing to throw a few punches” at the prince to test how long it would take Harry’s personal protective officers to intervene.

Mr Eden quipped: “A few seconds, it turned out.”

Mr Tindall said: "At Balmoral, the family are now having the same conversation."

He added: "Except the Queen has taken his security away."

Mike Tindall described the topic as a "no-go area" when he was asked about Prince Harry and Meghan Markle's departure for Canada.

On a podcast recorded after the Duke and Duchess of Sussex announced they were "stepping back" as senior royals – the husband of Zara Phillips was asked about the drama.

He dodged the question and referenced his recent holiday to Australia with his wife and children.

Things cooled when podcast host Alex Payne joked that it wasn't an ideal time to be on a break to the other side of the world since there was a "lot going on in The Firm" back home.

The ex-rugby star replied: "Let's not talk about that."

Asked if he had been in touch with the duke or Meghan before he flew to Canada, Mike said that the thorny topic is a "no-go area" adding that he "doesn't know anything about it".

He shares a close bond with Prince William – with the pair recently seen hugging at Houghton House Horse Trials, in Norfolk

They could be sen enjoying some playful banter with Mike as the two men laughed and joked as Zara looked on.

But their cheeky exchange didn't last too long and they before they knew it, they gave each other a huge cuddle.

Previous : Jake Paul’s remarkable earnings during boxing career dwarf those of rival Tommy Fury
Next : Mum’s shock as son, 3, found soaking wet and alone after walking out of his nursery