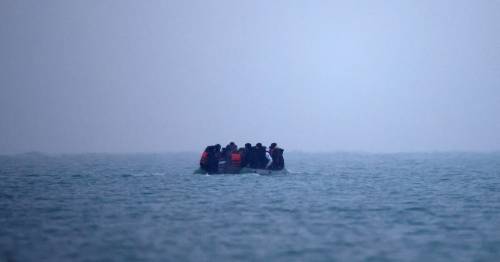 The inflatable dinghy which tragically capsized leading to the deaths of at least 27 people may have collided with a container ship, say reports.

Officials in France said the vessel was 'very frail' before it got into trouble on Wednesday as its passengers tried to cross the English Channel to the UK.

Five women and a girl were said to be among the victims in the tragedy that has been called the deadliest incident of its kind ever.

The French government's official toll initially stood at 31, but was later revised to 27.

Describing the victims' vessel French interior minister Gerald Darmanin said it was 'very frail' and added it was 'like a pool you blow up in your garden.'

A report in La Voix du Nord, a regional daily newspaper, claimed that the boat had 'collided with a large ship' which it said was a 'container ship.'

These reports have not yet been confirmed in the wake of the tragedy which has also left two people critically ill in hospital with severe hypothermia.

Two suspected people smugglers are currently in custody in Calais after being arrested north of Dunkirk near the Belgian border, according to French daily newspaper Liberation.

The Dunkirk prosecutor's office has opened an investigation for "assistance with entry to illegal residence in an organised group" and "aggravated manslaughter".

Prime Minister Boris Johnson said he was ''shocked, appalled and deeply saddened'' after the tragedy.

He said: "Now is the time for us all to step up and work together and break these gangs who are literally getting away with murder," adding "this shows the gangs who are sending people to sea will literally stop at nothing."