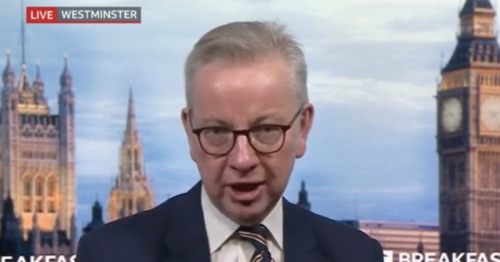 Tory minister Michael Gove has been ridiculed for using "silly voices" in a strange interview about the cost of living crisis in which he attempted Scouse and American accents.

The Communities Secretary was talking about the prospect of an emergency budget to support struggling Brits after Boris Johnson hinted at help "in the days to come" during a Commons debate on the Queen's Speech.

The Prime Minister's words were widely seen as an indication he and Chancellor Rishi Sunak were planning an emergency budget, following calls from across the political spectrum for quick action.

But immediately afterward Treasury sources rejected the idea and distanced Mr Sunak from the PM.

Mr Gove was asked about the row as part of an interview on BBC Breakfast but responded by launching into a bizarre rant about "commentators".

He said the words “an emergency budget” and “a major, capital letters, big news story” in what appeared to be an American accent, before saying “calm down” in a Scouse accent, which reminded viewers of comedian Harry Enfield’s sketch.

Mr Gove told the programme: “But that doesn't amount to an emergency budget, which is what some people immediately thought that it did.

"It is an example of some commentators chasing their own tails and trying to take a statement that is common sensical, turning it into a major 'capital letters' big news story.

"And in fact, when the Treasury quite rightly say 'calm down' then people instead of recognising that they've overinflated the story in the first place, then say 'oh, this is clearly a split'."

Labour's Lisa Nandy was among those tweeting about the interview.

She posted a clip of Mr Gove speaking on the programme and said: “What is he doing!?

“Making jokes and using silly voices while families across the country are struggling to survive.

“This isn’t a game (or an Oxford Union debate!). People are having to choose between heating and eating.

“Take it seriously. Do your job.”

Downing Street said Mr Gove was an "effective Cabinet communicator" after he was criticised for doing impressions..

The Prime Minister's official spokesman said: "Michael Gove is an effective Cabinet communicator who has a variety of means of getting the message across."

Asked if he does Scouse impressions during Cabinet meetings, the spokesman said: "Not in the ones I've been in."

Previous : Britain vows to defend Sweden if Russia attacks over NATO bid
Next : Nando’s employee shares types of customers she sees every day – and drink trick they try