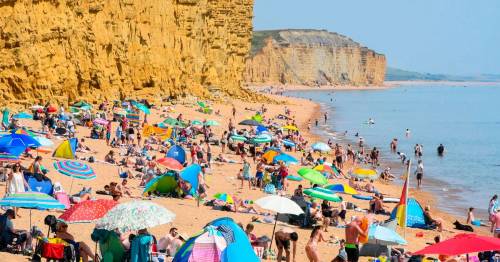 Brits have basked in astonishing temperatures passing 30C this week – with the sunshine set to continue as we head towards the weekend.

But, make the most of the blue skies and balmy conditions, as things are set to change as we move into next week.

Forecasters have warned the intense sun will disappear on Saturday and Sunday, with heavy rain and thundery showers predicted to sweep across the country.

The switch in conditions could cause flooding as well as transport disruption, the Met Office say.

England recorded its hottest temperature of the year on Tuesday – 32.2C recorded at Heathrow Airport. 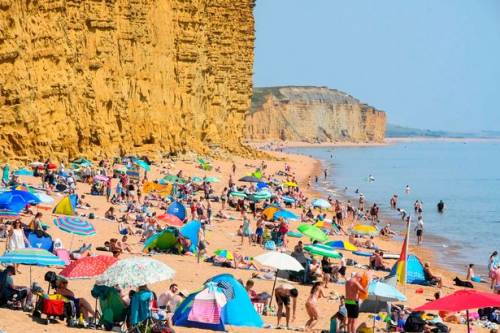 Sunbathers and visitors flock to the beach to enjoy the scorching hot afternoon sunshine at the seaside resort of West Bay in Dorset
(Image: Graham Hunt/BNPS)

An amber heat warning has even been given but time is ticking with the warm, sunny weather to be replaced by dark clouds and winds.

Warnings for rain have been issued by the Met Office, with the potential for further thunderstorms, accompanied by lightning and hail on Saturday.

Up to 3.93 inches of rain is possible in some areas this weekend, with temperatures forecast to dip from the sweltering highs of this week. 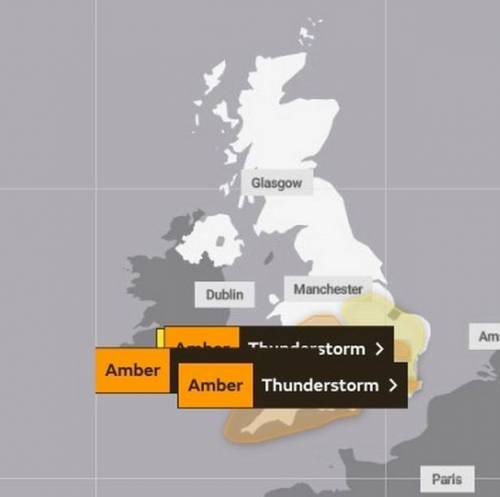 The Met Office warns: "Outbreaks of rain and some thunderstorms are expected to spread from the southwest on Friday night, this introducing unsettled conditions to much of England and Wales for Saturday and Sunday.

"Heavy, thundery showers are likely to break out by day, particularly on Sunday when these could be widespread and locally torrential. Lightning and hail are also expected.

Met Office Deputy Chief Operational Meteorologist David Oliver said: “This yellow rain warning comes as temperatures are set to dip for many areas over the weekend.

"A spell of rain, heavy in places perhaps with some thunder, moves in from the southwest late on Friday and into Saturday.

“This is followed up by an unsettled weekend for much of England and Wales with showers breaking out widely. 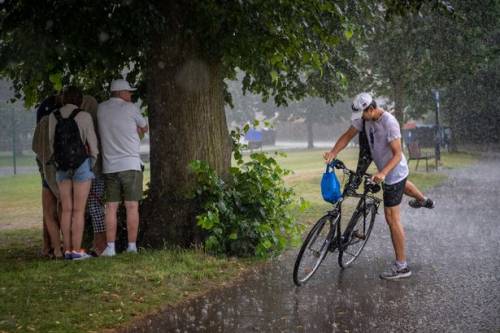 "Some very heavy showers or thunderstorms are on the cards, especially during Sunday. However, farther north it is set to stay mainly dry with some fine weather, although it will not be as hot as has been seen recently.”

One extreme heat warning spans London and South East England, South West England, Wales and the West Midlands and is in place until 11.59pm on Thursday.

The second is in place until 11.59pm on Friday and is for Northern Ireland.

The Met Office writes: "The current hot weather is expected to continue until later this week, with daytime temperatures peaking on Wednesday and Thursday. 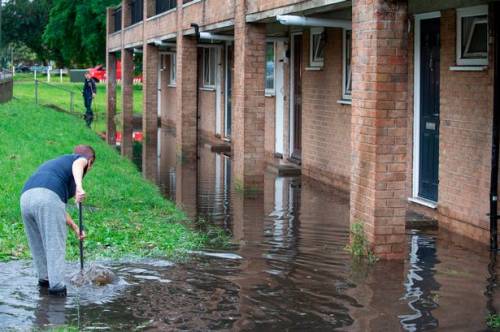 Residents trying to clear flood water from outside their homes in St Pauls Cray, Orpington, as the heatwave gave way to heavy rain and thunderstorms
(Image: LNP)

When it comes to the longer term weather forecast, things are set to become a little more unsettled into August.

Into early August, forecasters say there will likely be a mix of sunny spells between heavy showers before conditions possibly settle down and warm up again.

It's set to look brighter towards the middle of August, where it is most likely to become more settled 'with drier and warmer conditions developing'.