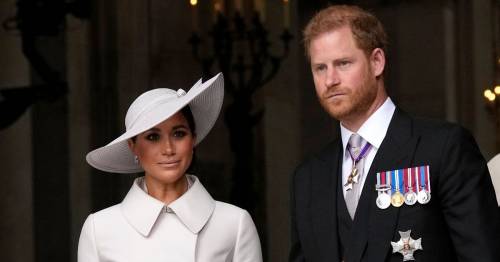 During her time as a working senior royal, The Duchess of Sussex worked with a number of charities and launched some important projects.

Her interests included mental health, women's rights, animal welfare and bringing communities together – such as the victims of the Grenfell Tower tragedy with the release of a cookbook called ' Together: Our Community Cookbook'.

Meghan's history of charity work is well-known and was an active supporter of many organisations before she married Prince Harry.

At a young age, Meghan sent a letter to the soap manufacturing company Procter and Gamble after watching a TV advert that she thought was sexist as it claimed only women did the housework.

Her other work made her a World Vision ambassador in 2016 and she visited women in the urban slums of Mumbai to empower them to become businesswomen with the Myna Mahila Foundation.

Given Meghan's interest in the importance of charity work, many experts were surprised that she didn't stay in the royal fold for longer than she did.

Diana, Princess of Wales' biographer, Andrew Morton, spoke to The Mirror's podcast, Pod Save the Queen, about Meghan and why he believes she would have been a "natural royal" if she had stayed a bit longer.

He said: "The great tragedy, I think, is that Meghan and Harry didn't give it long enough to see whether they could give it a go. They were on the out almost before the wedding music had finished."

He continued: "Meghan is a natural, I've got pictures of her when she was age 10 leading a march against the first Gulf War at her school. The local TV cameras turned up and she was there giving interviews.

"She spoke at the United Nations with Hillary Clinton. She had the great possibility of using her talent and her position to make a genuine change to the world. I don't think she's going to make such a change living in Montecito."

Elsewhere in the interview with Pod Save the Queen, Andrew Morton revealed that Prince Harry saw his marriage to Meghan as his way out of the Royal Family and why The Queen would have been understanding if they'd just taken a few years to think about their future roles.

Morton said: "They were thinking about living in New Zealand and they even spoke to the Prime Minister of New Zealand about this – so they had all kinds of plots and thoughts for their future.

"It didn't work out because when it actually comes down to it, Prince Harry is cursed with charisma but hates being a prince and I think that he saw Meghan as a way out. They didn't have to leave the Royal Family in the way that they did, but they did."

The author continued: "Back in the late 1940's after they married, The Queen and Prince Philip lived in Malta for a while as he was pursuing his career in the Royal Navy and many thought he would end up as First Lord of the Admiralty as he was such a star.

"They never thought for a minute that George VI would die so soon and thought that they would have 20 years or so on the fringes of the Royal Family.

"So The Queen has always been very understanding of anybody who wants to step back for a few years and just enjoy family life because you're a long time being a royal."

Morton went on to reveal that Prince Harry and Meghan had started to plan their departure from the Royal Family as early as the end of 2018.

He told the podcast: "Harry was having conversations in a London hotel with Oprah Winfrey back in November 2018, just six months after they'd been married. So they were thinking about a different direction of travel pretty early on.

"The irony is they had been given the keys to the first class lounge when Prince Harry was given the position of Youth Ambassador to the Commonwealth, which was effectively the Queen's way of saying 'you do the rest of the world, leave William and Catherine to do the UK where they will eventually be the Heads of State.'"