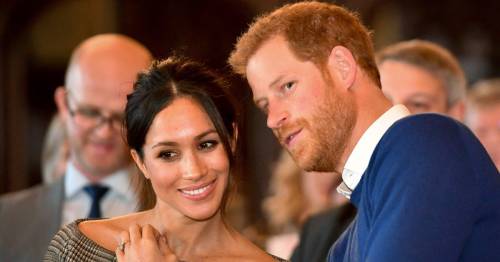 Meghan Markle was warned about not going overboard with her "massively extravagant" spending as she joined the Royal Family, it has been revealed.

Jennie Bond, a former Royal Correspondent at the BBC, has previously warned the Duchess of Sussex over her spending and said the public "disliked it".

When Meghan became part of The Firm many were hopeful she would help modernise the Royal Family.

Bond appeared to be aware of how Meghan's spending habits would translate to the public.

In 2019, speaking to Yahoo!Life, she warned the mum-of-two over what she described as her "massively extravagant" spending.

She said: "What I think that Meghan has to be careful of is that she’s so, pretty much A-list celebrity as well as senior royal.

Prince Harry and Meghan Markle visiting a school in Harlem on September 24, 2021
(

"I am getting the feeling that the public don’t like her terrifically spending huge quantities of money.

"Being extravagant, massively extravagant, she can afford it, she is a wealthy woman, but it doesn’t play very well, so I think she needs to just watch that."

At the time of the interview, Meghan's designer wardrobe was reported to be worth more than half a million pounds.

And further reports at the time criticised that the Duchess' royal wardrobe during the three-day tour of Monaco was estimated to be worth £110,000.

In the same interview, Bond added: "I think I’d ask Meghan, suggest to her that she tries not to play any games with the press.

"Try not to be too celebrity, because that doesn’t go down well with the public, and to try to ignore the fact that she’s getting quite a lot of flack from various directions."

Six months after the interview, Meghan and Prince Harry stepped back as senior royals.

The Duke and Duchess of Sussex moved to Canada in 2020 before setting down in California where they live with their son Archie and daughter Lilibet.

Last week, Meghan and Harry were accused of not being "in touch " with their audience by wearing couture clothing, a royal expert has claimed.

Jennie Bond was a royal correspondent for 26 years
(

Several weeks ago, the couple made a series of appearances around New York and met with political figures, including the city's mayor Bill de Blasio and the US ambassador to the UN Linda Thomas-Greenfield.

They also visited children at a school in Harlem, where Meghan read them her children's book, The Bench.

During the visit, she wore a vivid burgundy Loro Piana cashmere coat, which is thought to cost around £4,282, and matching wide-leg trousers, which are reportedly priced at £1,235.

And royal expert Katie Nicholl from Vanity Fair said this did not "make any sense".

Speaking on True Royalty TV's The Royal Beat, she said: "Turning up at an underprivileged school in Harlem in a couture coat that costs more than the combined incomes of most of those parents at the school – it doesn’t make any sense."