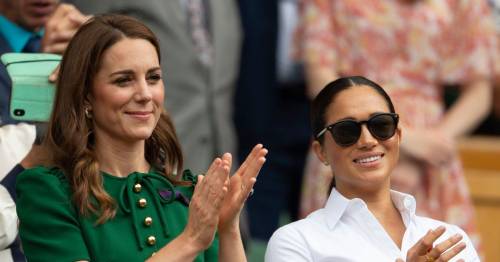 Meghan Markle misunderstood her sister-in-law the Duchess of Cambridge's gift of flowers after their infamous bridesmaid dress fitting row, an insider has claimed.

There has been much speculation over the private event in the lead up to the Sussexes 2018 wedding, with initial reports claiming Kate was left in tears. However in her bombshell interview with Oprah Winfrey, Meghan claimed it was the other way around and she was the one upset.

She said Kate brought her flowers as an apology, but an insider now claims the gift was meant to be a peace offering rather than an apology.

Meghan told Oprah: "The reverse happened. And I don’t say that to be disparaging to anyone, because it was a really hard week of the wedding.

"And she was upset about something, but she owned it, and she apologised. And she brought me flowers and a note, apologising.

"She did what I would do if I knew that I hurt someone, right, to just take accountability for it."

But speaking to the Daily Mail, a pal claims William believes Meghan "massively disrespected" Kate during the interview.

They said: "It obviously never occurred [to Meghan] that they were a peace offering, not an apology."

The insider also claims that Kate and William have gone out of their way to smooth tensions over, including the Duchess skipping the unveiling of a new statue of Princess Diana so Meghan's absence wasn't as obvious.

They said: "Despite much provocation, both William and Catherine have tried to keep the peace more than anyone will ever realise."

In the Oprah interview, Meghan said the way the royal family handled the crying rumours about her and Kate's meeting was a "turning point".

She said: "The narrative with Kate — which didn’t happen — was really, really difficult and something that . . . I think that’s when everything changed, really."

Telling her version of events, Meghan said: "A few days before the wedding, she was upset about something pertaining — yes, the issue was correct — about flower-girl dresses, and it made me cry, and it really hurt my feelings.

"And I thought, in the context of everything else that was going on in those days leading to the wedding, that it didn’t make sense to not be just doing whatever everyone else was doing, which was trying to be supportive, knowing what was going on with my dad and whatnot.

" It wasn’t a confrontation, and I actually don’t think it’s fair to her to get into the details of that, because she apologised. And I've forgiven her."

Previous : Royal Ascot punter turns £5 bet into more than £300,000 backing every day four winner
Next : Labrador had to be rescued after falling off side of 3,000ft mountain