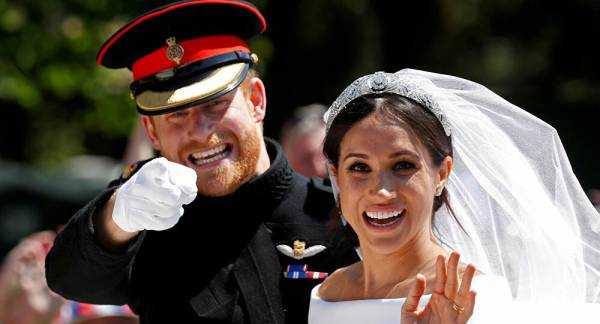 A new book on Meghan Markle’s experience within the royal family is soon expected to hit stores around the world. Some excerpts have already been revealed to the public, suggesting that the new biography has probably “torpedoed” any chance of the couple’s return to the Royal family.

It was Meghan Markle who actually “guided” her husband Prince Harry on his “journey to wokeness”, the authors of an upcoming couple’s biography “Finding Freedom” told National Public Radio, referring to the Duke of Sussex’s “very public” experience of learning about race issues.

Omid Scobie, the co-author of the soon-to-be-released book which has already caused a furore among the British public due to its revelations, noted that the prince has become “more attuned” to racism thanks to his wife Meghan.

“We’ve seen him learning and educating himself along the way, but this experience of witnessing Meghan face racist remarks and commentary would have been the first time he’d seen someone in his life or someone he was particularly close to affected by it in a certain way”, Scobie said.

The writer noted that it is some examples of media coverage that allegedly portrayed Meghan as “not one of us” that caught her husband’s attention.

“And I think there are things like that which Harry’s really had to become more attuned to and learn to see when it happens in front of him. And Meghan would have been the person that guided him on that journey”, Scobie explained.

Claims Made in the Biography

The “Finding Freedom” book, which is expected to come out next week, has promised to “reveal unknown details of Harry and Meghan’s life together, dispelling the many rumours and misconceptions that plague the couple on both sides of the pond”.

The Duke and Duchess of Sussex were not interviewed for the book, their spokesperson noted back of July. Their press office however previously said that the couple were “relaxed” about the book’s authors interviewing their close friends and assistants. According to Scobie and his co-author Carolyn Durand, they spoke to around 100 sources close to the Sussexes, including their good friends, royal aides, and the palace’s staff.

Some of the revelations include Meghan Markle’s alleged “disappointment” with the wife of her husband’s brother Kate Middleton, over her cold welcome to the family, as well as Prince William’s supposed warning to his younger brother about not rushing into marriage. It was said that following this advice Prince Harry accused the Duke of Cambridge of “snobbery”.

Commenting on this purported conversation between the two brothers, Scobie said that even prior to it, Harry had already “experienced some of his own friends speaking about Meghan or making negative remarks behind her back that word had traveled back to him about”.

“So when William sat down and had that conversation with him, that was the starting point”, the book’s author claimed.

It was previously reported by the Daily Mail that Prince Harry’s father, Prince Charles, was “hurt” by some of the claims made in the book, but still kept in close contact with his son, ensuring that “the door is always open” for his return to the United Kingdom. They Sussexes stepped down from their senior royal positions in March to move to the United States via Canada, where they are currently living with their 15-month-old son Archie in Meghan’s native Los Angeles.