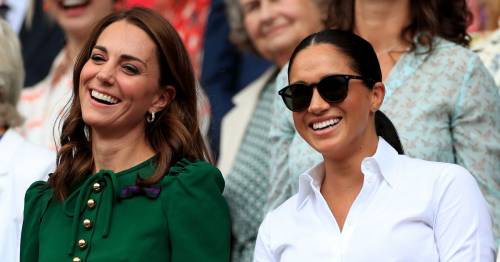 Ahead of the highly publicised royal rift, Meghan Markle seemed to have a close relationship with her sister-in-law, the Duchess of Cambridge.

They carried out a series of joint engagements, including a day out at Wimbledon, when Meghan found her feet within the royal family.

After realising that Meghan was someone special, Prince Harry was reportedly keen to introduce her to Kate, who he has always been extremely close to.

The meeting was very important to the loved-up prince, who wanted the Fab Four to get along.

Trying to make a good impression, Meghan didn't arrive empty handed and brought Kate a thoughtful gift as it was close to her 35th birthday.

Get all the latest news sent to your inbox. Sign up for the free Mirror newsletter.

When she arrived at William and Kate's Kensington Palace apartment, Meghan handed Kate a dream diary.

A friend said: "Meg had bought Kate a small birthday present – a very smart leather-bound ‘dream diary’ for her thoughts and ideas which Kate loved."

Meghan's gifts to Kate is seemingly a thoughtful trend despite her and the Duke of Sussex quitting their senior roles.

She reportedly purchased the Duchess of Cambridge another 'surprising' present last year amid the rift.

Just before their wedding in May 2018, Meghan also allegedly gave Kate a bracelet to thank her for helping out.

It was the Sofia Day Co's Kensington Bracelet, which was also said to have been gifted to six of Meghan’s bridesmaids and best friends.

Kate's birthday plans were overshadowed in 2020 as it came the day after Meghan and Harry announced their plans to quit the royal family.

Their bombshell statement resulted in a series of logistical phone calls and chats between the Queen, Charles and William as they tried to work out what to do next.

In December 2020, Meghan and Harry also sent Christmas presents to George, Charlotte and Louis in the post, and the two families chatted on video call over the holidays.

Speaking on True Royalty TV's The Royal Beat before Christmas, royal expert Katie Nicholl said: "I think it's no secret that there were great tensions and great difficulties in the relationship.

Harry and Meghan gifted the royal children presents in 2020
(

The couple will attend the Queen's Jubilee
(

"There was an unbreakable bond between them and they were so close.

"I don't think they will ever be close the way that they were, but there has been nine months now since Megxit. I think relations are better between them.

"I know they are in touch, they do talk. Harry has sent over a load of Christmas presents for the Cambridge children.

"They will Zoom, they will chat over the holidays.

The married couple will allegedly reunite with their nieces and nephews next month after it was confirmed the couple will be attending the Queen's Platinum Jubilee.

Previous : Family’s hell as mould infests every room of ‘disgusting’ flat and spreads to furniture
Next : Monkeypox virus spreads across world – symptoms and how worried we should be – World News