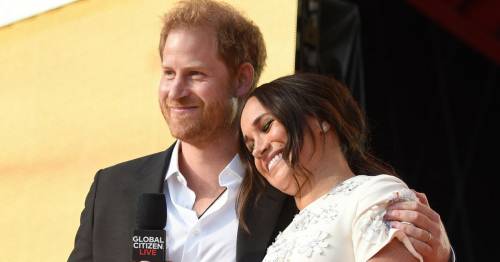 Prince Harry and Meghan Markle are "not interested in making things work" with the royal family, an expert has claimed

Next week, a celebration is being at Kensington Palace in honour of Harry's late mother Princess Diana.

Around 100 people are expected to attend the party that will thank donors for funding a commemorative statue of Diana which now sits in Kensington Palace’s Sunken Garden.

However, it has been confirmed Harry and Meghan won't be travelling to the UK for the bash.

It comes amid an ongoing rift between the couple and the rest of the royal family.

And royal expert and author Penny Junor says it is a "great shame" the couple won't be at the party.

She told The Sun : "It is a great shame they are not coming.

"The longer they stay away the greater the rift and the more difficult it is to come back from. They don't come back and the rift continues.

"There is a lot of work to be done, it's a shame they can't come back. It shows they are not interested in making things work."

The statue honouring Diana was unveiled by Harry and his older brother Prince William in July in a small ceremony due to ongoing Covid-19 restrictions.

The event next week will be a larger gathering in order to thank those who contributed to the sculpture.

Sir Elton John is among those who have reportedly been invited to the party, but it was revealed earlier this week, he had to decline an invitation as he is due to undergo hip surgery.

Since Harry and Meghan stepped down as senior royals early last year and moved to the US, Meghan has not returned to visit.

Harry has returned twice – for Prince Philip's funeral and for the unveiling of the Diana statue.

But their son Archie has also not travelled back to the UK since the move and four-month-old daughter Lilibet, who was born in California, is yet to visit Britain.

There has been speculation that the Sussexes could make a return to the UK to visit at Christmas or possibly to have Lilibet christened.

But speaking on the Royally US podcast last month, royal expert and author Robert Jobson suggested: "I’m not sure Meghan will ever come to Britain again, she’s not popular here now.

“The idea of her standing next to the Queen, doting on the Queen when you’ve got a book coming out in which you’re going to spill more dirty linen in public does seem a little hypocritical."

Previous : Plumber fears losing home in £100k Ring doorbell privacy dispute with neighbour
Next : Why a Wisconsin brewery is crowdfunding lawsuits over the axing of school mask mandates