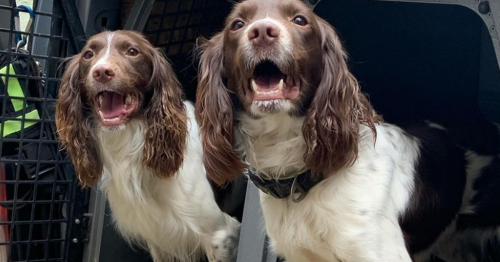 A team of 16 sniffer spaniels have been searching hotels, aircrafts and transport for creepy crawlies that would have you leaving one star reviews.

While some people still believe bed bugs are a myth, simply part of a funny night time rhyme for tucking the kids in with – for Merlin Environmental, they’re a very real issue.

Founder of the pest control company, Adam Juson revealed that his team go on between 10 and 12 jobs per day, and find bed bugs on at least one of them each shift.

Adam, 45, has been in the pest control industry for more than two decades, but it was when he came across a bed bug infestation on a plane he wondered if dogs had a role in the industry.

He said: “I started out specialising in bed bugs as a pest technician. I was working on an aircraft and opened a seat up and was hit by the smell of these things.

“I wondered if we could get some dogs trained for it and it turns out you can. We’ve now been doing this for over 10 years."

His team of spaniels help detect bed bugs with pinpoint accuracy within just four hours, eradicating the need to use chemicals to treat a bedbug infestation.

Adam, from Crawley, West Sussex, owns three retired sniffer dogs of his own, as well as a litter of seven sprocker spaniel puppies who are currently being trained up for the job.

He said: “When the dog carries out a behaviour we like, we’ll give them a prize. We start off playing with tennis balls and playing fetch.

"Then, once they’re on to the tennis ball and play with that, you teach them to use their nose by throwing it into long grass to sniff out the ball.

“Beyond that, you take the visual aspect away and begin hiding the ball in a container, and when they sniff it out, they’re then rewarded with a different ball.

“We then teach them that the fastest way to get the thing you want is to sit and stare at it.”

It’s a similar technique that’s used to train police dogs to sniff out drugs, cash and firearms, but the difference with bed bugs is that their pheromones are constantly changing, meaning the dogs need to learn multiple scent components to be able to detect an infestation at any point.

The dogs are also taught to discriminate between live and dead bed bugs, meaning that after an infestation has been found and treated, the spaniels can confirm if they’ve been eradicated.

Adam’s team works all over the UK, including in Northern Ireland and the Channel islands, and for an average city centre hotel, they’ll need two dogs to get the job done in a day.

Adam added: “Some big hotels with around 900 rooms would need a bigger team, with around six to eight dogs to get it done in a day.

“You might change the dog out after 30 to 50 rooms depending on external factors, such as how warm it is outside.”

One of the Merlin Environmental spaniels searching a laundry
(

When a dog indicates that there are bed bugs, the area is then heated up to over 50 degrees to a point where the bugs won’t survive and die of dehydration.

Adam’s team of hounds then go in and check that they’ve been ridded of the bugs.

Currently, Merlin Environmental has 16 dogs, alongside four in training, plus the litter of seven puppies starting their training at three months old.

During the pandemic, the team mostly searched hotels supporting the Nightingale hospitals where NHS staff were staying.

Adam said: “It was quite a strange experience for us because experts said that in six months the bugs would have starved out and there would be nothing left in hotels.

“We’ve been going to sites that have been closed for 18 months that are now active infestations. The resilience of these bugs is quite spectacular. They literally shut down all functions if there’s no food around, similar to fleas.”

Bed bugs predominantly feed on human blood and take a massive blood meal when they feed – around seven times their own bodyweight.

Unlike mosquitos and fleas that rely on blood pressure to push the blood out, bed bugs can suck, filtering the water from the blood.

Merlin Environmental added: “Symptoms vary from person to person after being bitten by bed bugs. Within a day or so of the bite, many grow an itchy red welt. Others do not or have no reaction.

“While bed bugs are not known to transmit diseases, they may decrease the quality of life by causing discomfort, insomnia, anxiety, and embarrassment.”

Previous : Ukraine hit by cyber attack as officials warned to ‘be afraid and expect the worst’ – World News
Next : What not to do before buying a house, according to a property expert