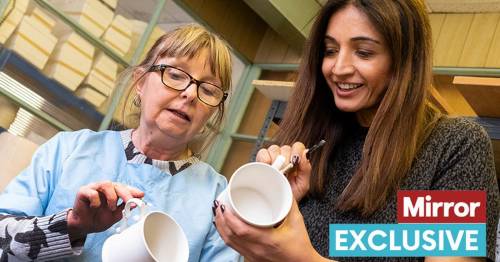 My face froze in terror as I ­applied the gold rim to a bone China cup that is destined to be part of the mountain of royal Platinum Jubilee merchandise.

Arts and crafts have never been my strong point and the experts who carry out the gilding have five years’ training… I was given a five-minute crash course.

Make no mistake, this was a brush with potential disaster – a very costly disaster, at that.

This workshop in the heart of the Potteries in Staffordshire, is one of the epicentres of ceramics activity ahead of the jubilee celebrations.

Cups, plates and beakers with a English floral design are being created to commemorate the historic event.

By the time of the jubilee next month, well over 1,000 of these pieces will have been ordered or sent to all corners of the globe. Though my effort probably won’t be among them…

Dave Lockett, my tutor for the day and a bone China printing and ­decorative specialist at his workshop, Edwards & Lockett, looks understandably nervous but does his best to reassure me.

“It is very, very easy – and expensive to mess it up! You’re doing fine.”

Edwards and Lockett is one of two workshops commissioned by Simon Willis, owner of Goviers, the Royal commemorative retail firm founded in 1904, to produce a range for the ­Platinum Jubilee.

And demand is high.

“The made in Britain stamp is very important to collectors,” says Simon.

Earlier, I watched the cups created from clay with cotton wool care at AW Ceramics.

I checked out the fettling process – where potter Chris Collins removes and smoothes the rough edges before the cup is fired in the kiln and glazed again before being sent to Dave’s workshop.

There, each colour in the Goviers bespoke jubilee design is applied individually to the transfer sheet, which is then applied by hand to the cup.

It is painstaking work but worth it to create something that will stand the test of time – looked after well, these cups will last more than 100 years.

The most popular item in the Goviers jubilee range is the Loving cup, with two handles, which I was tasked with ­decorating.

The Queen pictured at Sandringham House earlier this year
(

Having watched it being created –from glazing at the pottery studio to print transfer and gilding and at Dave’s workshop – the level of skill at each level is near hypnotic.

The end result is so delicate that, when held to the light, the piece is almost translucent.

Simon says: “Most of the big British manufacturers are gone, so it’s ­momentous events like this when small artisan workshops like Edwards and Lockett and AW Ceramics come into their own.”

It is most definitely showtime for Dave, who co-owns his workshop with brother Graham, 68. The business was founded by their father, Les, in 1946.

Dave, 58, says: “Our dad was a paratrooper in the Second World War and fought in the battle of Arnhem.

“He was very proud to serve Queen and country, and he continued to do so – producing commemorative pottery for all Royal occasions.

“I was clearing through some old paperwork the other day and came across a letter dated 1977 signed by the Queen’s Equerry thanking my dad for a plate he made for the Silver Jubilee and sent to the Queen. It bought a lump to my throat reading the letter.

“Our dad died in 2009. Our mother passed away last year – she was the same age as the Queen. But she lived to see the Diamond Jubilee, which was very special to her.”

Since taking over the business, Dave’s proudest professional moment came when he received a commission from ­Wedgwood to create a set of 12 teacups and saucers for the Queen Mother.

Dave recalls: “It was such a thrill for us all here to know the Queen Mother and the royals would be drinking from a cup and saucer we had all played a part in creating.

“I’ll never forget when the courier came to pick up the tea set, and he saw the address. ‘You’re having a laugh?’ he said. ‘I’m going to the Buckingham Palace?’

“It would be lovely to think something we have produced might end up in the Queen’s hands again.”

Producing ceramics fit for a queen is no mug’s game, as I discovered at Tony Johnson’s pottery studio.

Tony, 76, set up the firm after being made redundant from his job at Royal Doulton. He and his son Alex, 31, make the cups and mugs that then get sent to Dave for decoration.

Tony Johnson and Princess Anne in 1973

Tony, with 60 years’ experience, says: “Like most folk in the Potteries, I followed my family into the profession – my dad Victor worked as a figure polisher at Royal Doulton, and I am pleased my son, Alex, decided to work with me after he finished university.”

During his time at Royal Crown Derby, Tony was commissioned by the Queen to create a dinner service as a wedding present to Princess Anne and Mark ­Phillips. The Princess visited the factory to see the set being made. And Tony gave her a tour.

He says: “She was marvellous, very interested and asked lots of questions. It was a proud moment, but, for me, making cups for Goviers Jubilee range is even more special because it’s the first time my little business has been commissioned to do anything like this.

“It might not be used by the Queen, but it does bring immense pride to know I am producing something people will cherish for years to come.”

The Loving cup is £65 as part of a limited edition of 950 – the one handle cups cost £45 – and Simon hopes this range will eventually find itself in the royal household.

He says: “The Royals love fine china and commemoratives. They are all incredibly knowledgeable and keen collectors, so it’s not beyond the realms of possibility.”

Alex Wright and his father Anthony in Stoke on Trent
(

“Corgis, of course, are symbolic of the Queen,” says Simon, “and character jugs can seem quite old fashioned, but they still sell very well. Collectors love to hunt out rare and unusual pieces.”

As much as Simon would love to see his range on show at Buckingham Palace, his regular customers are most valued – whether they live in big mansions or care homes.

One of the customers had Goviers packaging delivered to her care home every week over Covid, but they all had to go into storage for a few days for her safety before she use it.

“She told us she was like a child at Christmas waiting to open her gifts,” he says. “They brought her a lot of joy. Most of our customers buy for themselves.

“As people get older, they get more nostalgic; with every jubilee, the next one has more meaning. This jubilee is a extraordinary one to live through.

“These cups will be around long after our children and even grandchildren, every piece will tell its own story for generations to come.”