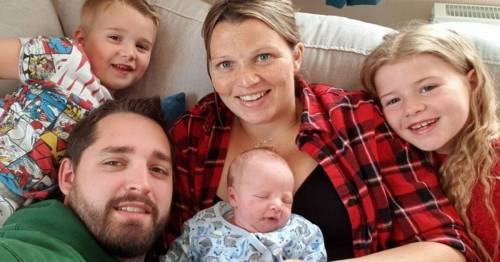 Struggling parents have admitted that they are skipping meals to ensure they can feed their children.

Amid the ongoing cost-of-living crisis, ordinary families are finding themselves squeezed tighter than ever and have been forced to turn to increasingly desperate measures.

Kate Worby and her partner Charles Skudder described how they were fighting to keep their “heads above water”.

Together they look after three children aged eight, four and nearly one, Devon Live reported.

The 29-year-old mum works three jobs as a carer, cleaner and children’s entertainer whilst 29-year-old Charles is a full-time student who also runs a valet business and worked nights as a carer until the home shut down recently as well as helping with Kate's entertainment business too.

The couple said something had fundamentally gone wrong if they were working, on Universal Credit and still couldn't afford to live
(

As well as skipping meals to keep the kids eating, they also only heat their children’s rooms in the house and take a calculator to the supermarket to make sure they don’t break their tight budget.

Kate said: "We are forever trying to keep our heads above water like I'm sure it is for a lot of families.

“Everything is going up but wages are not matching it so we are having to make our money stretch even further.

“Physically we can't do any more hours than we are already working. We have not had a day off in goodness knows how long.

"It's a constant battle in your head as you think, can I justify not taking an extra shift? Often we just do it because we have to. We are both just so stressed.”

She added: "The children will always come first. They get free school dinners but if they come home from school really hungry I will cook them a meal, even if it was for me and Charles, or I try to make the food stretch by bulking it out such as with frozen vegetables.

"When Charles and I are not eating enough it takes its toll. I am so tired as I have not eaten really in three days.

“We either don't eat or between us have one meal a day, even if it's just cheese on toast. It's not enough, but it's at least something. It's a very real thing for a lot of families.”

Kate described herself as a “savvy spender” and said she always looked for the best bargains but that they were unable to splurge on some snacks like biscuits others take for granted.

She uses the calculator on her phone when shopping to make sure they never overspend.

Kate admitted it can be embarrassing when her calculations aren't quite right and she has to leave some food behind at the checkout.

She added: "I have heard the phrase heat or eat said a lot but for us it's not actually the case. It's heat less, eat less.

“We can't make a choice between the two because we have a young baby so we have to heat his bedroom and the other children's bedrooms but not anywhere else.

"We limit it to heating just the rooms that are essential to be heated. Luckily we are coming into summer again but in the winter it will be a massive problem. There will be extra coats and jumpers being put on."

The couple rent a three-bed property and were forced to spend the money they were saving for their deposit.

Kate said: "We have never been overly flush with money and have always lived within our means. Our rent has gone up which has impacted us a lot.

“At the same time, everything else has gone up like council tax and energy bills. All the rises build up so we have to watch every single penny we spend.

"We don't drink or smoke or go out, and we have no hobbies. All we literally do is go to work and look after the kids.

“I don't know what we are doing wrong in the grand scheme of things to be working so, so hard and being stuck in this loop.

"We just have to keep going and hope that one day things will get better. Once Charles finishes university he will hopefully start bringing in a good wage, but until then we just have to take it week by week.

"I also hope that by talking about how we are struggling it can raise awareness and the big wigs might think, 'hang oo, this is not fair'.

“We work, we are on Universal Credit and we are still struggling. Something has gone wrong somewhere for that to happen."

Previous : 3 kids found dead in Los Angeles home, mother arrested
Next : Keir Starmer’s ‘honour and integrity’ as he vows to quit if he’s fined over Beergate