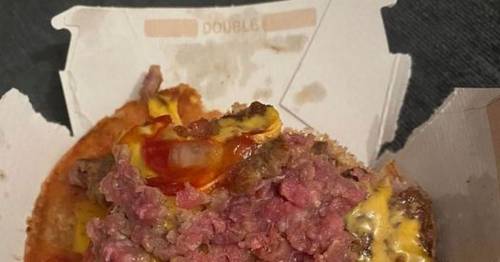 McDonald's has apologised after a raw burger was delivered to a customer, while others claimed they 'fell ill' from eating at the same branch.

Amy Bamford posted a photo of her 'medium rare' Quarter Pounder with Cheese which she ordered online from the fast food restaurant's branch in Kirkintilloch, East Dunbartonshire.

She ordered through Just Eat and claims she knew something was wrong with the burger immediately after opening the wrapper, the Daily Record reports.

The burger's pink meat can be clearly seen in her photo after she dug deeper into the product to be certain.

She wrote on Facebook : "As if McDonald’s Kirkintilloch has sent out RAW burgers are you actually joking?

Amy Bamford received this burger from the Kirkintilloch McDonald's
(

"Just to let people know upon opening the bun it didn’t look like this it looked cooked on the outside but was really greasy and when I ripped open the burger this is what was in the middle.

"At first glance the burger looked fine but it was pure mushy and greasy and when I tore it open nothing but pure mince."

She also criticised the response from JustEat, who offered her a free meal after she tried to complain.

Amy wrote: "They told us to contact just eat for our money back and they gave us a code so we could get a free meal I DONT WANT A FREE MEAL."

Others were quick to comment about similar experiences from the same branch in the past few days, with some claiming they became sick after eating.

How a Quarter Pounder should usually look

One said: "I ate here yesterday and I've been up sick all night.

"Had my lunch yesterday and I've been spewing. The back of my throat is killing me so now I'm freaking out in case it's been that."

Another added: "Nah we just got stuff as well a few hours ago it was the same."

A third wrote: "I ate from here last night and had a sore stomach within 20 minutes of finishing my food."

McDonalds said they are aware of the incident and said checks on the calibration of the restaurant's grills were conducted.

They added they are unaware of any other instances of raw food being sent to customers.

A McDonald’s spokesperson said: “We are very sorry to hear about this customer’s experience.

"Food safety is of the utmost importance to us and we place great emphasis on quality control, following rigorous standards in order to avoid any imperfections.

"Unfortunately on this occasion, we did not meet these standards. We understand the customer has been liaising with our Customer Services team.”