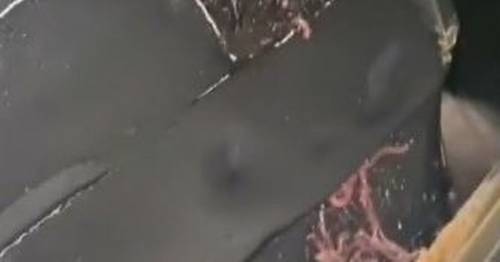 A video from inside the Old Kent Road branch of McDonald's in London has caused a stir online.

Shared on TikTok by a user named @mcoldkentroad, who claims to be an employee at the fast-food restaurant, the video shows worms in the drain of the soft drinks machine.

The viral clip, which has since been removed from TikTok, initially suggested the creatures are maggots but a spokesperson for McDonald's said they were earthworms.

As first reported by MyLondon, McDonald's said they immediately closed the drinks station and a deep clean was carried out after the issue was identified.

A spokesperson told the publication: "We take cleanliness and hygiene extremely seriously. Unfortunately, a number of weeks ago we were made aware of an issue in the drain serving the drinks station at our Old Kent Road restaurant.

The video of the worms went viral on TikTok
(

"We immediately closed the drinks station and our hygiene team identified the cause of the issue which was fixed before a deep clean was carried out.

"The area was inspected by external specialists and no drinks were served to customers until we were sure that the issue was fully resolved.”

McDonald's added that specialists confirmed it was an 'isolated incident, not an infestation'.

Before being removed, the video was viewed over 400,000 times and numerous people took to the comments to share their disgust.

One user said they eat at the restaurant "at least once a week" to which @McOldKentRoad replied "don't".

The original video poster also asked McDonald's in the comments "what do you have to say about this" but didn't get a reply.

In a stitch of the video another TikTok user said they had been "put off now", while someone else simply wrote: "No thanks".

This comes after maggots were allegedly seen dropping from the ceiling of a McDonald's in Beckton last week.

One diner filmed the wriggling larvae on a table and 'all over the floor' at the restaurant on Thursday morning (November 18).

McDonald's has apologised and said the store was immediately closed.

Previous : Jessie J in tears during emotional performance a day after tragic miscarriage
Next : Desperate race to save newborn baby who has just weeks to find heart transplant