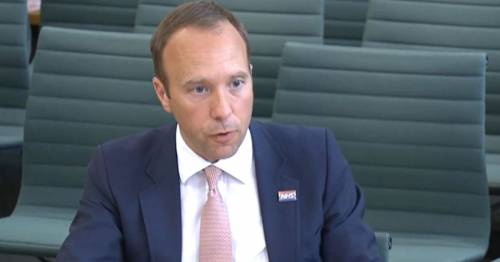 Matt Hancock’s evidence to MPs yesterday was at best unconvincing and at worst deeply insulting.

The Heath Secretary appeared to blame everyone but himself for the Government’s mistakes in its handling of the virus.

His claim that there was never a shortage of protective kit flies in the face of the evidence.

Frontline staff died due to the lack of PPE; others made theirs from makeshift materials.

The Mirror and several other national newspapers highlighted this scandal on a near daily basis at the height of the pandemic.

If kit was available, as Mr Hancock claims, why was it not distributed to NHS staff?

He was equally evasive when it came to protecting the residents of care homes.

Nor was there an adequate explanation of why it took so long to introduce the first lockdown.

Mr Hancock, who has yet to visit the wall of remembrance for Covid victims, has shown he won’t confront the consequences of his actions …or take responsibility for them.

Too often the world has looked away in the face of genocide and mass torture.

We are in danger of repeating the same mistake with China’s brutal repression of Uyghur Muslims in Xinjiang.

A report by Amnesty International reveals how the Chinese state is carrying out crimes against humanity with its brainwashing, torture and abuse of hundreds of thousands of Uyghurs in internment camps.

Limited sanctions imposed by the West are not enough. Pressure should be put on multi-nationals that import goods made, in some cases reportedly by slave labour, in this region.

People will rightly ask why this catastrophe is not leading the agenda at the G7 summit.

A month's festival of football starts on Friday as the Euros get under way.

Whether you are a supporter of England, Scotland or Wales we hope your team does your country proud.

Previous : Prodigal Trads and the Holy Father
Next : Tory minister says England players taking the knee are being divisive