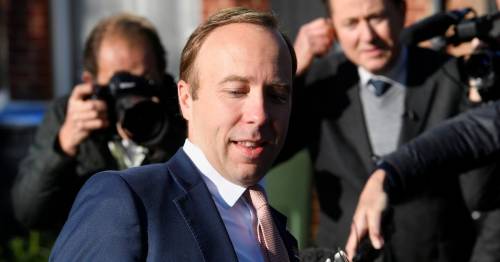 Matt Hancock has a new job jetting round the world as a United Nations special representative, barely three months after quitting over his Covid rule-breaking affair with an aide.

The former Health Secretary resigned in June after images emerged of him and Gina Coladangelo embracing in a Whitehall office when social distancing curbs were in place.

Mr Hancock offered a grovelling apology and admitted he had broken voters' trust, but he has now revealed he will take new unpaid post as UN special representative for financial innovation and climate change.

He said: "Honoured to be appointed United Nations Special Representative. I’ll be working with the @UN@ECA_OFFICIAL to help African economic recovery from the pandemic and promote sustainable development."

The under secretary-general of the UN, Vera Songwe, said Mr Hancock’s “success” in handling the UK’s pandemic response is a testament to the strengths he will bring to the role.

His new role will take him to Africa and beyond, helping countries whose economies have been "ravaged" by the pandemic.

It comes after a report by MPs levelled heavy criticism at the Government, saying the UK's late lockdown in March 2020 led to thousands of unnecessary deaths.

Matt Fowler co-founder of Covid-19 Bereaved Families for Justice, who lost his 56 year old father Ian in April last year questioned whether the former Health Secretary was suitable for the role.

He said: "Given Matt Hancock contributed to the 'worst UK public health failure ever' and was forced to resign after breaching his own social distancing measures, maybe he should take care of his obligations to those of us who lost loved ones to Covid-19 in the UK by making sure the evidence the forthcoming inquiry will need is available before taking on any new challenges.

"We aren't sure how he has the time to take up this new role given he seemingly hasn't been able to pass emails from his personal Gmail account that relate to his handling of the pandemic to the Department of Health or Government.

"Then again, maybe when those emails are seen in the cold light of day maybe the UN would think twice about his appropriateness for this role."

TV's Piers Morgan also hit out over the appointment, tweeting: "Hancock’s reward for ‘one of the worst ever public health failures’ during his tenure as Health Secretary – a fancy new job at the UN.

"His timing for this announcement is almost as bad as his handling of the pandemic."

Labour MP Alex Sobel tweeted: "I’m a supporter of International Intergovernmental Organisations but ⁦@UN⁩ did you even do a little background check on Matt Hancock.'"

The study, from the cross-party Science and Technology Committee and the Health and Social Care Committee, said the UK’s preparation for a pandemic was far too focused on flu, while ministers waited too long to push through lockdown measures in early 2020.

In a wide-ranging report, MPs said the UK’s planning was too “narrowly and inflexibly based on a flu model” that failed to learn the lessons from Sars, Mers and Ebola.

Former chief medical officer Professor Dame Sally Davies told MPs there was “groupthink”, with infectious disease experts not believing that “Sars, or another Sars, would get from Asia to us”.

Others have congratulated Mr Hancock on his new post, including Communities Secretary Michael Gove, who tweeted: "Wishing @MattHancock well in this critical role supporting the developing world at a crucial time."

Previous : Mexico warns migration will not slow without more U.S. investment in Central America
Next : Ministers face court probe into ‘government by WhatsApp’ use of private messages