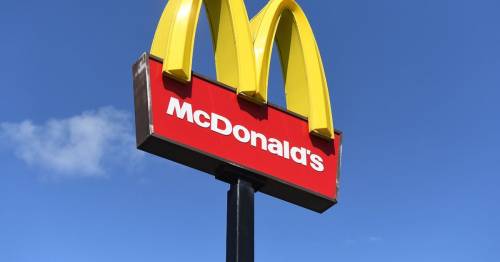 A married McDonald's worker sexually assaulted a teenage colleague by cupping her genitals during a drive-thru shift, a court heard.

Predator Matthew Blair targeted the girl as she worked in a booth at the fast food chain, reports the Daily Record.

He also violated another colleague at a bus stop in Paisley, Renfrewshire, after she had finished her shift, it was said.

Twisted Blair lodged a defence that he had the consent of his victims.

But the two females bravely gave evidence against him – with the youngest victim explaining how he "cupped" between her legs.

Blair was found guilty of sexual assault and will be sentenced next month.

The case was heard at Paisley Sheriff Court
(

John Penman, prosecuting, questioned the teen victim, who told the court she had been sexually assaulted by Blair as she worked.

Behind a screen, she cried on the stand as she said: “The shift had started fine and it was quite a busy day.

“We were having a laugh and talking and then things got worse.

“He slapped my bum and I slapped his back. That was something that happens all the time in there.

“It was my first job and I just thought this is what happened.

"He grabbed me over my work trousers at my genital area. He cupped my genitals with his hand.”

She explained how “sexual banter” was part of everyday life at the branch.

She wept: “Because I had seen this type of thing happening everyday, I thought it was banter.

“I was a young girl and I knew nobody should touch me there if I didn’t want them to."

She added: “I didn’t go to work to be violated, I left my job because of that.

"I had clocked in to work to make money, I didn’t think I would clock in to be sexually assaulted.”

Anthony Boland, defending, questioned Blair who stated that at the time of the offences he was, and remains, a married man.

The defendant told the court: “My wife and I have been married for three and a half years.

"At the time of the incidents, the relationship was crumbling.

“We were arguing constantly, I was working quite a lot of night shifts and my wife was studying at the time to be a teacher so we would never see each other.”

Blair's second victim also bravely stood in court and explained how her former colleague had sexually assaulted her as they walked to the bus stop after their shift.

Blair pinned her against a wall and tried to repeatedly kiss her and touch her between the legs while he told her “not to tell anyone", it was said.

Weeping in the court, she said: “I finished my shift at 10pm and Matthew offered to walk me to the bus stop.

“He was sat outside at the benches waiting for me to come out.

"As we got to a tunnel he pinned me against a wall and started to kiss me. He told me I wasn’t to tell anyone and he proceeded to try and touch me.

"I didn’t give consent and I didn’t have any warning this was going to happen.

“He grabbed my shoulders and touched my vagina region over my clothes. I tried to pull myself away, it made me feel really uncomfortable.”

The woman tried to walk away but was followed to the bus stop.

She explained: “He caught up with me and said, ‘aw come on, nobody needs to know.’

Blair who now lives in Inverness, lost his employment at McDonald’s after his victims complained (file)
(

"At the bus stop he tried to pull me in again. He pulled me in by my waist and tried to grab my vaginal region.

“I felt embarrassed, ashamed and horrible, I just hated it.”

Blair who now lives in Inverness, lost his employment at McDonald’s after his victims complained about his behaviour.

On finding Blair guilty, Sheriff Lindsay Kooner said: “Both witnesses were credible and reliable in their evidence.

“There is nothing that you said that raised reasonable belief to consent.

“I accept each of these encounters were an assault and were a sexual assault.”

Blair was placed on the Sex Offenders’ Register.

Previous : Nursery worker’s ‘joke’ before stabbing pal 18 times after saying she loves her
Next : Kuwait emir makes public appearance after delegating most duties