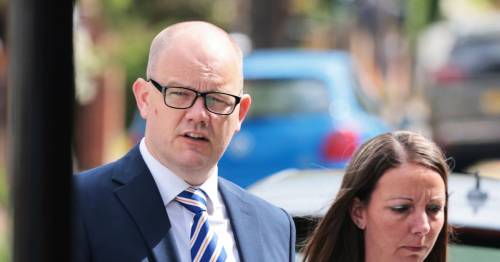 A married Home Office boss who laced his pregnant lover’s drink with abortion drugs was jailed for three years and nine months.

Darren Burke, 43, tried to serve Laura Slade, his mistress of five years, a spiked glass of orange juice after she told him she was pregnant and planned to keep the baby in December 2020.

Ms Slade, who became suspicious and refused to drink it, called police and traces of mifepristone, a prescribed medication that brings about abortions in the early stages of pregnancy, was found.

The day before the incident, Burke messaged Ms Slade asking if he could come over for a chat and bring her a “Starbucks latte or a tea” which a judge said revealed he had made the decision to spike her.

Burke, who has been sacked from his Home Office role as deputy director for the emergency services mobile communications programme, was convicted by a jury of unlawfully administering a poison to procure a miscarriage.

Darren Burke with his wife outside Isleworth Crown Court
(

The day before the incident, Burke messaged Ms Slade asking if he could come over for a chat and bring her a “Starbucks latte or a tea”
(

Sentencing him at Isleworth Crown Court today (Thurs), Judge Alastair Hammerton said: “Your actions in offering to pop over and bring a coffee are examples of your planning. In addition your offence presents a violation of the trust Ms Slade had placed in you. And in addition you committed this offence in Mis Slade’s own home.

“Furthermore your breach of the trust Ms Slade placed in you has adversely affected Ms Slade’s ability to trust others.”

In a victim impact statement, Ms Slade said it makes her “feel sick” to think about what could have happened if she had drunk the juice.

Prosecutor Paul Jarvis said: “She started undertaking PTSD therapy in May 2021 to help cope with the betrayal she felt. She talks about how the experience totally changed her approach to people.

Darren Burke 41, arriving at court where he has today been jailed
(

“She finds it hard to trust people. She tries to think ahead to her future whether she might be ready at some point for a relationship with someone else and finds that difficult to conceive of.

“She trusted him and feels he has let her down massively. She feels like she has lost her best friend and doesn’t think she will get over what he did to her.”

Jurors at Isleworth Crown Court heard Ms Slade, a single mother-of-two, told Burke she was pregnant in November 2020 and there was “extensive contact” over Whatsapp.

Burke, of Windsor, Berkshire, sent a link to a local abortion clinic to Ms Slade on Whatsapp and told her: “Babes I understand it’s your body but you can’t keep it.

“It will be everyone, your kids, my wife, your family, everyone. This is bigger than you and I. I’m asking you please.”

A week later Ms Slade went for a scan and told Burke she would be keeping the baby which led to an “acrimonious” conversation on Whatsapp where he said he did not feel she was taking his views into account.

Burke, of Windsor, Berkshire, sent a link to a local abortion clinic to Ms Slade on Whatsapp and told her: “Babes I understand it’s your body but you can’t keep it"
(

On December 3, Burke messaged Ms Slade asking if he could come over for a chat the next day and bring her a “Starbucks latte or a tea”.

When he arrived he offered her a cup of tea, which she refused, but he went into the kitchen and took a glass of water she was drinking with him.

He came back with the water and a glass of orange juice mixed with water.

Ms Slade said she turned it down because she had morning sickness and said in her evidence: “I had a gut feeling something wasn’t right, I can't explain why I had that gut feeling.

“He was overly jolly and interested, trying to make conversation.

“He was very flustered walking between the front room and the kitchen and that's when he was offering me a drink again.”

The court heard before leaving, Burke asked again if she was going to drink the orange juice before taking it away.

Ms Slade said after he left she saw the glass in the sink and noticed “white granules’ on the rim that looked like washing powder.

Jurors at Isleworth Crown Court heard Ms Slade, a single mother-of-two, told Burke she was pregnant in November 2020 and there was “extensive contact” over Whatsapp
(

She said: “I looked in the bottom and I could see it all sitting at the bottom. I stuck my finger in it and rubbed it together and it definitely had granules.”

The court heard she texted Burke asking if he had put something in her drink to which he replied: ‘F*** off. I mixed your water with juice’.

In his evidence, the dad-of-one said he had the pill with him and was going to throw it in Ms Slade’s bin but was concerned her children or dog might find it.

He said: “I took one of the glasses that was there and used it to break up some of the big tablets and washed it round with the cup.”

The court heard Burke admitted buying the drugs on the internet for £200, but police were unable to trace the order as he deleted all his search history.

Judge Hammerton said this was an example of Burke’s attempts to “cover up or conceal evidence”.

Defending Burke, David Spens QC said his client had already been punished as he has lost his “extremely well paid job” at the Home Office and his family were forced to move house.

He said: “His actions have not just impacted Ms Slade but on those close to him. His wife fortunately has forgiven him.

“He was suffering from depression at the time. This rather adds to the pathetic nature of his behaviour on the day. It’s a combination of having been made redundant because of the pandemic and a number of personal family problems.”

But Judge Hammerton said: “Contrary to your counsel’s submissions I do not regard your attempt to administer mifepristone as either amateurish or pathetic.”

The court heard Ms Slade suffered a miscarriage a few weeks later but it was not related to the incident.

A further charge of supplying a poison to procure a miscarriage was ordered to lie on the file.

Burke was also banned from contacting Ms Slade by a restraining order.

Previous : Parklife proposal couple eye up Bora Bora as festival boss offers to pay for honeymoon
Next : Hottest day of the year CONFIRMED by Met Office as Brits swelter in 29.3C heat