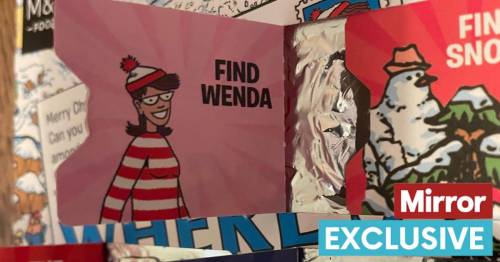 A Where's Wally advent calendar has been labelled "outrageous" for only including one female character.

The calendar was bought at Marks & Spencer and Matthew Crowley has slammed the retail giant for signing off on the product.

It depicts a crowded skiing scene and each window contains a challenge to find specific people, for example 'Find the man ski jumping' or 'Find the tree hugger'.

But the 29-year-old graphic designer counted 23 men, five objects, three animals but only one woman – a character from the books called Wenda.

However, many of the other figures depicted are not named characters from the series and Matthew, from Lougton, Essex, said the "imbalance" was very striking and not at all in keeping with modern society.

He added: “It would be interesting to see if it was just a complete blinding accident or if they’ve targeted this advent calendar that’s all male on purpose," he told the Mirror.

The 31 windows only contained one female character
(

Matthew said it was "outrageous" Wenda was the only woman
(

“Obviously, we are well versed with the idea of a snowman usually being male but you could dress him as a woman or have added women to the numbers to make it more representative of the public.

“I used to read Where’s Wally as a kid. From memory, I remember there being more diversity in the books."

Matthew was bought the calendar by his girlfriend's mum but forgot about it until Wednesday when he was clearing away the last of his Christmas decorations.

He then proceeded to open each window all in one go, and said the lack of women may not have been as obvious if he'd been opening each day throughout December.

"The fact that M&S have given priority to more men and even more objects than women is outrageous," he said.

Matthew was bought the calendar from M&S in Loughton, Essex
(

"With all the discussions and talks of equality one would think that a retail giant such as M&S would be aware of the image that they are creating.

"Thousands of young and impressionable boys and girls will have opened this calendar to find that yet again, society is putting men first."

He went on to say: "Please don't misunderstand me, I'm not hoping for Wally to step down as the main character, I would like the imbalance of 23 male to one female figures be addressed."

Matthew said the bias, "whether it be ignorance or conscious, needs to be highlighted".

"Without calling out the small subconscious messages giant corporations are sending out to the public, the discussion of equality will be redundant.

"If society keeps going as it is with men maintaining the forceful dominant mindset, more and more tragic events will unfold like many already did in 2021."

As a graphic designer, Matthew works closely with a number of major supermarket brands.

He said: "I do packaging, I do marketing and at all points we need to make we are representing the UK demographic. All the time we have to be thinking about who’s using and who’s benefiting from these products and make sure the brand toes the line.

“I don’t know how M&S work, or if they get external agencies to work with this kind of thing, but I would expect there to be a team of four or five designers before it then goes to print, which is then a wider team.

“That’s even before the brand manager of M&S and the stakeholders of Where’s Wally, who I would assume would sign off on this licensed product.”

Asked what he hopes to get out of his complaint, Matthew said: “I hope that they just apologise for the blunder and then look to improve for next year. That’s all that needs to happen.

"But without people calling out this sort of thing we’re just going to carry on down the line in this warped world that we live in."

An M&S spokesperson said: “We are grateful for the customer’s feedback and will pass it on to our product team so it can be taken into account ahead of next Christmas.”

Previous : Boy, 3, found roaming the streets after wandering out of school alone
Next : Tsunami in South Pacific after volcanic eruption in Tonga as New Zealand issues warning – World News