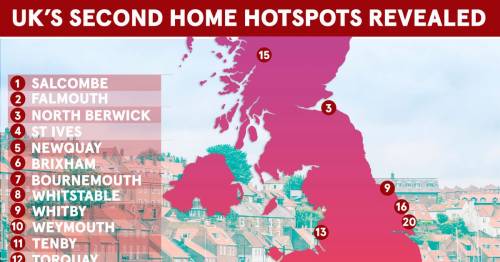 The top 20 coastal areas in the UK turning into ghost towns have been revealed in a new map showing where the most second homes are.

Locals say wealthy property owners are pricing out people who are unable to buy or rent properties in the area they grew up.

Taking the number one spot is Salcombe in Devon, followed by Falmouth in Cornwall in second and North Berwick in Scotland taking third.

Cornwall's St Ives, Newquay, Padstow and Bude are all included on the list, complied by Rightmove.

The rising house prices in Cornwall have been angering locals failing to get on the property ladder and some have even taken to targeting what they believe to be empty properties with graffiti.

One wall in the village of St Agnes had the message: "Second home owners give something back:

"Rent or sell your empty houses to local people at a fair price."

Jasmin Or, 24, grew up in the beauty spot St Ives where she claims everything has been turned into a holiday home leaving slim pickings for tenants.

Cornwall Council said there is "an imbalance in supply and demand" that the county has never seen before, with landlords and businesses snapping up properties and converting them into summer homes.

Jasmin says she is struggling to find a new place to rent when her tenancy runs out on May 10 and said "there's no homes left."

The hotel worker has exhausted letting agents and spare room sites, and fears in three weeks she will be sleeping rough.

She told the Mirror: "I'm wondering if this place will seem as beautiful to me when I'm sleeping on a bench in three weeks.

"Everything has been turned into second homes now and that's the issue.

"They're all Air BnBs and a lot of locals have been driven out of their homes now to accommodate for the summer."

St Ives MP Derek Thomas said in December that around 100 families compete for every available three-bedroom home in parts of Cornwall.

The Waterfront at Salcombe
(

The housing problem was accelerated during the pandemic when 'staycations' boomed.

In Whitby, Yorkshire, which is ninth on the list, frustrated voted to try and drive out second home owners – as they're pushing up housing prices.

A local referendum saw people in Whitby vote overwhelmingly to ban sales of new build homes and land to people who would not live there full-time.

People living in the North Yorkshire town say wealthy southerners are making it unaffordable, and the sense of community is being shattered.

Nearly 20 per cent of homes are second homes or holiday lets – more than double the proportion 20 years ago.

House prices have swelled to an average of £254,218 in the past year, with locals saying they are being priced out.

It has meant that young people who grew up in Whitby have been forced to move away, with property prices rising by 20 per cent in just a year.

Monday's ballot, which was called following a town meeting last month, reflects growing anger over homes which sit empty for much of the year.

However Scarborough Council said the result is "no more and no less than an expression of the views of the electorate of the parish who have voted in the poll, and is not binding on any organisation".

Whitby Community Network said the results "clearly demonstrate the strength of feeling in the local community".

It said in a statement: "We trust that our elected councillors will take note and take action."

Previous : Lewis Hamilton makes Canadian Grand Prix decision amid battle with back agony
Next : UK on verge of new Covid wave – and 2 new variants are to blame, experts warn