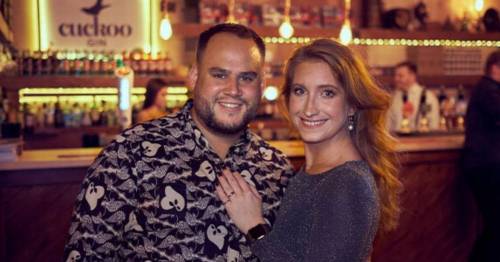 A craft gin created by a man to help fundraise money after his wife was diagnosed with cancer, has been crowned the 'world's greatest'.

Mark Long bought and set up Brindle Distillery in 2017, with his father-in-law Gerard Singleton in Chorley, Lancashire.

But when Gerard's daughter and Mark's wife Liz was diagnosed with cervical cancer in 2019, the family-run business decided to create a new craft gin to help give something back.

Liz was able to beat the cancer following invasive surgery, which meant the couple wouldn’t be able to have any more children.

They rolled out new product, Cuckoo Solace Gin, with a percentage of all sales going back to Jo's Cervical Cancer Trust, to show their appreciation for the support Liz received from the charity.

But in a heart warming turn for the business and family, the popular gin was even voted 'Gin of the Year 2021' by members of the Craft Gin Club, who put it before 11 other highly rated gins from across the globe.

Mark said: "‘We are delighted to have been voted the best, it’s a reflection of the hard work and dedication we have running throughout our team, who we are extremely proud of.

"Solace is our way of giving back, given the support we received throughout a really tough time in our lives, from those in the industry to our wonderful Cuckoo community."

Only a couple of short years after their wedding in 2016, the couple were dealt a devastating blow, when Liz's routine cervical cancer screening in 2018 made a worrying discovery.

Speaking to Craft Gin Club, Mark said: "The results came in, and they wanted to see Liz in hospital, quickly.

"It turned out she had a rare and aggressive form of cervical cancer. Luckily, Liz was able to have surgery to get rid of it. It was invasive surgery, and it meant we wouldn’t be able to have any more children.

"It was a three-month period that went from us hearing the bad news we’d never want to hear… to us embracing a new life that wasn’t quite as we imagined it would be.

"I started reading a couple of books on how best to deal with trauma, so I could try to make good out of a difficult situation.

"We were thinking about the amazing support we’d received, and how fortunate we had been to have it, when Liz said to me: ‘We have a gin brand, why don’t we use it?’"

The idea for the new gin was born – but the pair still needed to find the right name for it.

Throwing ideas around as they discussed their recent trauma, they realised that the support they had received had been a "solace" from the heartbreak.

Mark said: "I looked up the meaning on my phone: ‘comfort in the time of distress’.

"It felt like the perfect word to sum up what Liz and I had received.

"The message behind the gin is not only to thank people for their help but also to support those who might be going through the same thing and might not be lucky enough to have the help we had."

The compassionately created craft gin faced tough competition for the title though, as members of the Craft Gin Club were treated to special edition and exclusive gins from around the world.

But Mark thanks the locally sourced ingredients, which they take from Liz's parents, Gerard and Cath's farm, for allowing them to come up trumps.

The Director and Master Distiller said: "Solace Gin is designed to take you away to the Mediterranean whilst keeping true to the principles of what a refreshing G & T should be, and that’s juniper heavy.

The family run distillery has helped to raise £50,000 for the charity which supported Liz
(

"The recipe is a savoury combination of rosemary and lemon thyme from our farm, teamed with Nocellara and Cuquillo olives and lemon, with big hits of fresh grapefruit."

The Craft Gin Club has supported the family's efforts to raise money for the cervical cancer charity, donating £10,000 and bringing the total raised to £50,000.

Mark added: "Hopefully we can encourage more people to keep on top of screenings, just like Liz did.

"The money our customers and community have helped us raise goes towards supporting women and their families, who find themselves in similar circumstances to what we faced."

Previous : Workers confined in campervans at Spanish water plant to guarantee operations
Next : Mum and dad jailed for causing death of baby who ‘had life literally shaken from her’