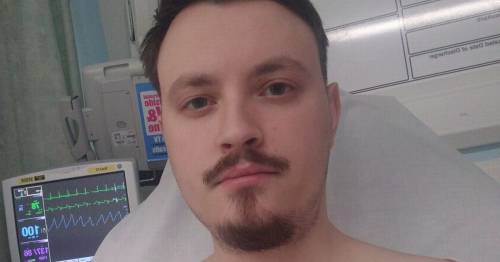 A man who suffered symptoms dismissed as anxiety for more than a decade was shocked when doctors eventually diagnosed a deadly heart condition.

Tom Roberts, 27, endured heart palpitations for years and was given medication for stress which did little to help.

More than 10 years later he was having a test for an unrated matter when the screen showed a heart anomaly, prompting an urgent referral to a cardiologist.

The specialist diagnosed Tom Wolff-Parkinson White (WPW) syndrome – where an extra electrical connection in the heart causes it to beat abnormally fast at times.

If had not undergone surgery doctors said he might not have lived to see 40, Manchester Evening News reported.

Tom said: “Throughout my teens and early 20s, I was affected by numerous vague – yet often debilitating – symptoms.

The 27-year-old was told he was suffering anxiety
(

“These ranged from palpitations and chest pain to a racing heart and serious bouts of fatigue, even though I was a young and seemingly sporty youngster at the time.

“No-one could identify what was wrong or causing the symptoms, so it was usually put down to stress and anxiety.

"Very sadly, this was all further exacerbated when my mum tragically passed away in my early twenties – but at no time was I offered an ECG to explore any potential problems. Instead, I was just prescribed betablockers and anti-anxiety medication.

“I continued getting on with my life, the best I could – travelling when possible and enjoying my job in conveyancing – where I still work now, with very supportive employers.

“But it was only some years later, when during investigations for an unrelated complaint, I was finally offered an ECG which picked up my WPW and I was immediately referred to a cardiologist.

“I was scared, petrified in fact, but determined that after everything I’d been through, I would survive.”

Tom underwent a four-hour procedure at Wythenshawe Hospital in Manchester and now, a year on, has made a complete recovery.

To mark the first anniversary of his initial diagnosis, on June 18, Tom will be joined by best friends Rochelle Antley and Billy Clements as they kick off the Heart 2 Heart Fundraising Walk, completing 20 miles from Edgeley Park, to Old Trafford, over to the Etihad and back to Edgeley Park.

Tom added: “Over the past year, undiagnosed heart conditions have often been in the news, following the on pitch cardiac arrest of Danish footballer Christian Eriksen and the premature retirement of Man City legend Sergio Aguero.

“That’s why we’re encouraging all participants in our walk to wear their Club’s colours with pride to show solidarity across all sporting communities, not just football, but for those who are diagnosed later in life.

“CRY helps to screen young people for these conditions which may not fully affect you until your adolescence or early adult life, providing essential diagnosis that can lead to effective treatment and surgery.”

Previous : Dom Phillips: Third man arrested in Brazilian murder probe of Brit journalist in Amazon – World News
Next : ‘My baby’s dad died two years before he was born – I can now see him in my son’