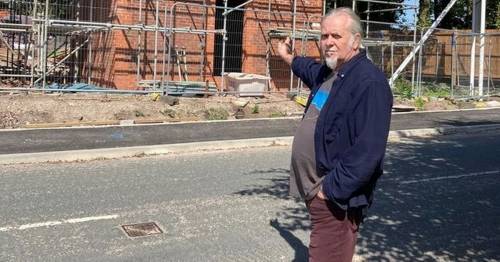 An enraged resident has blasted a "monstrous random bat tower" which appeared metres from his home.

It sprung up near a private home in Scarisbrick, Lancashire, sparking anger among those who live nearby.

The seven metre roost has been built in a housing development opposite Keith Denton's home.

Construction of the bat roost began in January this year, after an old house and factory – which were previously home to bats – were demolished to make way for new housing.

Mr Denton, however, claims told LancsLive he and his wife, Maria, were never told about the new bat tower.

The 68-year-old said: “It was November 2020 and a load of people arrived so I came outside and said what are you doing?

"They said they were going to the house down the road. They were looking to see if there were any species.

“There were about 10 of them. They said they were looking at the empty barn next door for any species in there and they had headlamps on and they went down to the empty barn 200 yards down the lane.

"I asked and they said they were going to look at the barn to see if there were any species. The next thing we knew, they disappeared.”

At the time, objections were lodged by the parish council and by Mr Denton, including concerns over additional traffic, claims of further major flooding and drainage issues.

A planning statement in March 2021, describes the site as 'not an environmentally sensitive area' but does go on to highlight an ecological survey carried out by consultants, recommending possible features including 'provision of a bat box…integrated within new or retained buildings.'

Meanwhile, owing to concerns over a bat habitat on the existing site, detailed consultation and surveys took place with groups including Merseyside and West Lancashire Bat Group in July

According to the government, all bat species, their breeding sites and resting places are fully protected by law as they're a European protected species, but a licence can be obtained from Natural England if people cannot avoid disturbing bats or damaging their habitats.

In Scarisbrick, the green light was given for an 'amended notice of full planning permission' in September 2021, subject to conditions, with a licence issued by Natural England, said to ‘safeguard protected species'

Work began to construct the roost in January this year
(

A sketch of the site, showing a 'bat roost' in its current location was unveiled on the council website on January 12 this year.

But Mr Denton claims no consultation was carried out with him, claiming that when work began to build the ‘monstrosity’ in January this year, he and his wife contacted the council, and were told it was a ‘minor, non-material change.’

The granddad added: “These bat people have told the council that it's one of the conditions of the planning permission and the housing going up.

“The bat people – maybe Natural England – turned up one night, it was a dark night in November 2020 and it must have been roundabout half past eight in the evening.

"I saw all these cars pulling up and I thought next door is having a party, and I said what are you doing? He said we are going down to the barn to see if there's any species.

"They were wearing dark clothes. He said he was going into the barn. – they were there for about an hour and a half and they didn't say who they were or where they were from.

"Next thing they disappeared; they got into their cars and went. It was all very mysterious.“

He added: “I don't want it. I don't mind bats but we have been here for 20 odd years and why they've picked the spot is beyond me. I would say it's a mystery. They could put it down the edge of Southport Road and it would still be okay but they decided to put it there because somebody said that's the best place for it. I don't know who the bat people are but we have had nothing, nobody has come and said this is the reason why we are building the bat tower here. I have only found out second hand.

“I have complained to the council, and to Eccleston Homes and they said they're not happy with it but it's a condition of the planning.

"They don't want it there – who does want it? The bat people; the council had to consult Natural England as part of the planning application and now they’re building a bat tower of seven meters high; there used to be squirrels, foxes. That's gone; we haven't seen a squirrel for about ten months.

“They said they did not have to inform us as it was a minor non-material change to the plan.

"I would not call it non-material, it’s seven metres high and they said it needed to be finished by the end of March.

"The next thing we knew they started demolishing the site of the factory and building the footings of the bat tower in January.

"There was no warning, no consultation whatsoever and they said they didn't need to, they said it was a non material amendment.

“We are worried that the bats will come in here as well.

"These random bat people have made my life a misery, and all this has been going on while I have been in remission from cancer and my wife is really stressed out and she had a stroke a few years ago. She's got a bad heart.”

He added: “They said there's a process. They said if you disagree with the decision, go to the Ombudsman.

“They said it would be 15 metres from my house. It's about 12, and let’s not forget, Covid started through bats; we have stayed safe so I don't fancy getting it from a bat now.”

The dad of two and granddad of twins said: “I want it taken down or moved; I don't think the new residents will want it.”

"These surveys identified an established maternity bat roost in the existing building known as Park House.

"Prior to planning consent being granted, approvals were required from Natural England, Merseyside Environmental Advisory Service and Merseyside and West Lancs Bat Group.

“Eccleston Homes Ltd take their obligations very seriously when dealing with protected species and we have constructed the bat facility in accordance with our Planning Consent.”

A spokesperson for Natural England said: “As a statutory consultee, we have provided advice and guidance to West Lancashire Borough Council about this development to reduce environmental impacts of the project.

"This included advice around the installation of the bat loft to provide an alternative home for this legally protected species.”

Previous : Pensioner left so angry about neighbour’s new wall he drilled holes into it
Next : How Russia’s ‘Satan-2’ nuclear weapon could be unleashed to strike back at NATO – World News