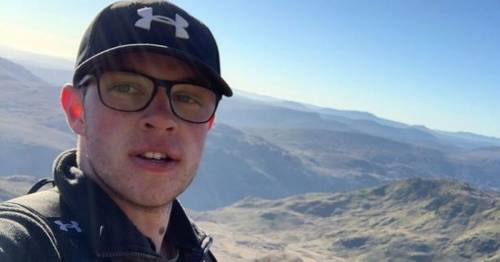 It took a disgruntled man 12 hours to complete a usually four-hour journey by train after Transport for Wales dumped people in the cold and dark to wait for a rail replacement bus when a series of issues tossed their service into chaos.

Ellis Thomas, from Caernarfon, north Wales, had spent the day with his partner browsing the Christmas markets in Cardiff, around 128 miles south as the crow flies, before catching the 3.23pm train home on Wednesday.

What should have been a four-hour journey then ended up taking more than 11 hours as he criss-crossed Wales after multiple delays and abrupt train terminations.

The 22-year-old eventually arrived back in Bangor, where he'd left his car two days before, just after 2am, Wales Online reported.

His awful journey, which he likened to a "day from hell", started going awry just one stop in when the train rolled into Newport.

An announcement informed passengers the train was terminating and Transport for Wales staff advised anyone heading north to race across the platform to catch the next train to Manchester instead.

The 22-year-old eventually arrived back in Bangor, where he'd left his car two days before, just after 2am
(

As Ellis and his partner sprinted over the bridge between platforms, the Manchester-bound train pulled away.

He said: "There were 50 people running over the bridge and when the train left, some people just lost it. I just thought, it is what it is and waited."

The train disruption was caused by a broken section of track at Craven Arms in Shropshire, which affected services on Wednesday and into Thursday.

By late afternoon, Ellis and his partner were still four hours from home. Staff advised the pair to catch the train to Hereford, which was "at least more northern".

But as the train reached Abergavenny, it halted and the driver said there was a red light ahead. It stayed on the tracks for two hours, not moving, said Ellis.

"We were just sat on the train outside the station for two hours," he said.

When they eventually got to Hereford, two hours later than planned, they heard the track had been fixed and the service could continue to Manchester.

But one stop from Craven Arms, the train ground to a halt again due to further faults down the line.

There was another two-hour wait for Ellis and his partner in a two-carriage train with no drinks trolley and one toilet out of order.

Another announcement told them the train would terminate at Craven Arms and a bus would offer alternative onward transport.

"Craven Arms is a small station, with no staff, and around 100 of us were just dumped there," Ellis said, adding that he watched the train they had just alighted sailing back in the direction it had come towards Cardiff.

"We all just stood there in the car park, waiting for the bus."

When it arrived, there were just 10 seats on it, he claimed, and he was "lucky" to get on.

"Next thing, everyone was pushing for the bus and ramming the door," Ellis added.

The bus only took them as far as Shrewsbury, which meant Ellis had still only completed two thirds of his journey and it was by now approaching midnight.

He waited an hour at Shrewsbury for the next train to Chester, which was then promptly cancelled and in desperation he phoned for a taxi instead.

Shelling out £50 for a cab, they were halfway to Chester when his train app said the 12.40am train to Bangor was cancelled too.

Ellis said: "I just thought we'll have to get a taxi all the way home. We went right through mid-Wales, Corwen, Bala, Capel Curig, all the way to Bangor," he said.

So exhausted from his near-12 hour journey, Ellis said he slept in until lunchtime the next day to recover. He is due to travel back to Cardiff this weekend to watch the rugby and is hopeful he has a more straightforward journey home.

A spokesperson for Transport for Wales said they agreed ticket acceptance with three other rail providers and added rail replacement services.

They blamed the broken tracks and said they "apologise to Mr Thomas for any inconvenience this may have caused."