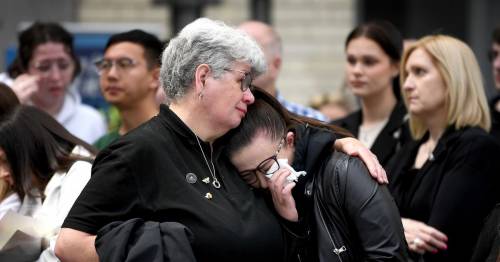 A city united in grief and defiance as Manchester marked the fifth anniversary of the Arena terror attack with the message: “Love is always stronger than hate.”

Bells across the city were set to toll at 10.31pm to mark the moment the bomb was detonated, killing 22, as fans left an Ariana Grande concert on May 22, 2017.

The names of all the victims were read out at the city’s Victoria railway station, where five years earlier youngsters had arrived looking forward to the concert.

Bereaved relatives and friends were among those paying their respects at the Glade of Light memorial near the Arena, opened by the Duke and Duchess of Cambridge earlier this month.

Before setting off on yesterday’s Great Manchester Run more than 20,000 racers applauded the 22 killed and the hundreds wounded in the atrocity.

Memorial at Victoria Station on Sunday, May 22
(

Among them was Greater Manchester mayor Andy Burnham, who said the attack “could have divided us but it didn’t, it did the opposite – it brought us together”.

He added: “I remember running around these streets [in the 2017 Great Manchester Run] days after the attack with tears streaming down my eyes just because of the number of people who were out and today will be poignant as well.”

Mr Burnham, who showed off the tattoo on his arm of a worker bee, the symbol of the city, stood alongside survivor Freya Lewis as the race began.

Michael and Joanne Hurley, parents of Megan, paying their respects at the fifth anniversary memorial
(

Freya, 19, was running for the Royal Manchester Children’s Hospital Charity to thank medics who saved her life.

She had to learn to walk again after suffering multiple injuries, fractures and burns in the bombing.

Freya, whose best friend Nell Jones was killed in the attack aged 14, has raised more than £67,000 with her family over the last five years.

Cheshire-raised Freya told BBC Breakfast ahead of the race how Manchester “means the world to me”.

She said: “It’s the most incredible city, I’ll always remember the way it came together and took me in as one of their own.”

PM Boris Johnson said: “The bravery and defiance shown so courageously by Mancunians in the days that followed shows hatred will never win.”

Bells in the city were set to toll at 10.31pm to mark the occasion
(

Ahead of the anniversary Coronation Street paid tribute to victims including superfan Martyn Hett.

Martyn, 29, who had a Deirdre Barlow tattoo on his leg, was 12ft from terrorist Salman Abedi who detonated a device as the concert ended.

During Friday’s episode of the ITV soap, rivals Gail Rodwell and Eileen Grimshaw carried a bouquet of flowers to a memorial bench in a community garden installed in 2018 on the set.

The Glade of Light Manchester Arena atrocity memorial on May 22
(

The plaque was seen, reading: “For Martyn and all those who lost their lives on the 22nd of May 2017. We stand together.”

He said he had to pay for private support despite having worked for the NHS for 30 years.

He said: “If I cannot get it then there is no hope for anyone else.”

Previous : Child in intensive care with monkeypox as medics warn cases are on the rise
Next : John McEnroe tells Emma Raducanu what she must do with coaching team ahead of French Open