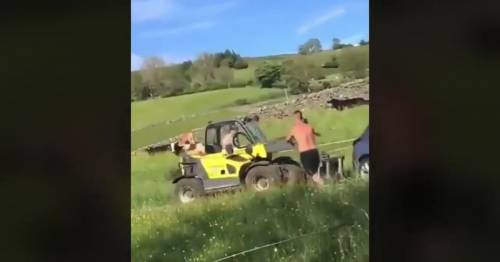 A man who tried to stop his pal's hire car being flipped over by a 'farmer' on a forklift says he was lucky not to have been seriously injured.

Police are investigating after video emerged of a parked silver Vauxhall hatchback being tossed into the air by a forklift driver in Teesdale, County Durham.

In the footage, a shirtless man, identified as apprentice diamond driller Charlie Burns, 20, flings himself at the car to try and prevent it from being damaged.

He then confronts the forklift driver just as the vehicle, which appears to be blocking a farm entrance, is hoisted onto the machine's forks and then flipped onto its roof.

The video also shows Burns, who is wearing black trunks, filming the scene and kicking the farmer's vehicle after the hire car is dumped onto the road.

In the same footage, shared on social media, the forklift then spins and clips his legs – knocking him to the ground.

Another clip then showed Mr Burns saying "f*****g farmers" as he pulls down his trousers and moons the camera. 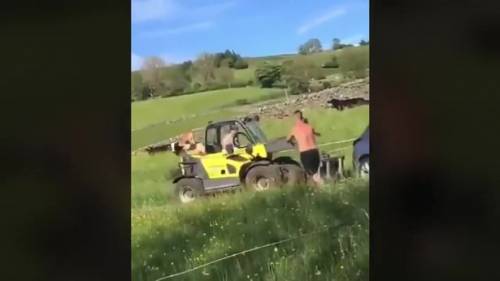 Speaking to the Mail, he said he had been off work with difficulty walking due to the bruising to his legs.

He added: "I was lucky not to have any broken bones, it hit me hard and knocked me to the ground.

"A lot of people have been suggesting we must have been doing something wrong for him to have reacted like that but we weren't." 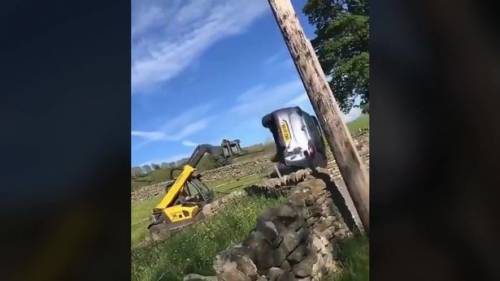 The man driving the machinery is thought to be a local farmer who was fed up with the hire car blocking his drive.

The lads had reportedly been on a day trip with friends from Tyneside to High Force waterfall in Teesdale when their vehicle suffered a blow out.

The man on the forklift then drove towards the group and flipped the car, before shoving it out onto the B6277 road. 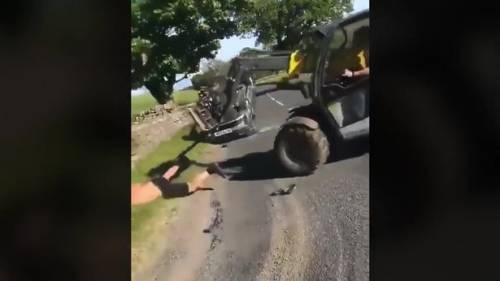 Durham Police are investigating the incident, which took place shortly after 5.45pm on Saturday.

The young men say they parked the car on the farmer's drive so that it wasn't blocking the country road past Brockersgill Farm at Newbiggin.

However farm-dwellers claimed the group had been behaving obnoxiously. 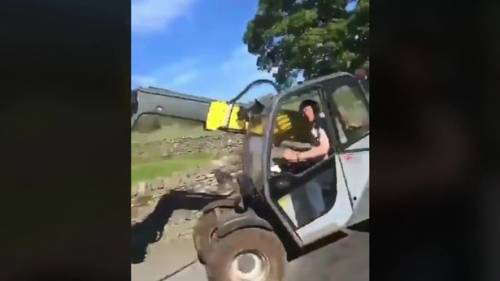 Mr Burns claimed he had been asked to give a witness statement to the police so was not able to comment further.

A woman at the farm alleged someone had been assaulted in the lead-up to the forklift incident, but did not say by who.

She claimed cars were being raced on the road shortly before and said the young men had been asked politely numerous times to move their vehicle.

She said: "The outcome was what happened and what everyone us now seen but there was a lot before that. Locals here are sick of youths coming into the area in cars."

Broadcaster Jeremy Vine shared the video on Twitter and said: "Driver has blocked farm gate with his car.

"Motorist has smartphone. Farmer has forklift. Who's gonna win this one?"

Durham Police said an investigation is still ongoing and no arrests have been made.

A spokesman said: "Officers attended the scene and an investigation into the circumstances is ongoing."