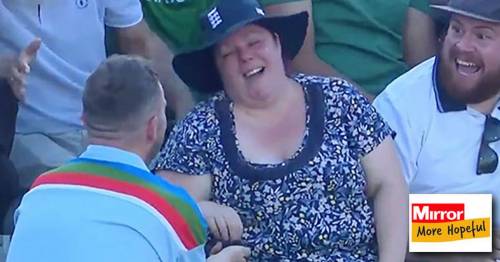 Those watching England's T20 International match against Pakistan were treated to a romantic surprise on July 20, as one spectator proposed to his girlfriend in the stands at Old Trafford Cricket Ground.

Footage of the man popping the question was captured by Sky Sports and quickly went viral online.

Wearing a retro England cricket top, Phil Jones got down on one knee in front of his girlfriend who was seen wearing an England sunhat.

Thankfully she said yes, plucking the ring from the box and placing it on her own finger as cameras captured her nodding and mouthing "I love you" to her groom-to-be.

Speaking to The Mirror, Phil who is self-employed, described the atmosphere at the cricket after the proposal as "crazy".

He said: "The crowd was buzzing, they were shouting Phil and Jill for about 30 seconds.

"All through the game everyone wanted a selfie and was shaking our hands. It was crazy."

But the best reaction of all came from the man sitting beside Jill, a complete stranger to them both, who looked so thrilled. 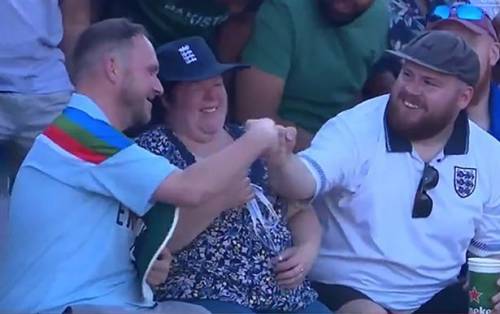 The couple are hoping to track down the kind stranger who sat beside Jill (far right)
(Image: Sky Sports Cricket)

"He really made that special moment even better with his reaction," Phil recalls. "He was friendly and polite. We never met him before, but he was a good guy."

The couple, both 41, liked the stranger so much they are now hoping to track him down and have him be the best man at their wedding.

The current plan is for the pair to tie the knot at Old Trafford Cricket Ground as it's become an important spot for the two of them, though they haven't set an official date yet.

If you know the man who sat beside Phil and Jill, or are that man, the couple would love for you to get in touch with them via Twitter @philandjill20.

Sky Sports commentator David 'Bumble' Lloyd told viewers that Phil and Jill have a "great backstory" following the proposal and he wasn't wrong.

The couple met on Jill's birthday in 2015 and their first date being at a Wetherspoons pub, which Phil admits wasn't the most romantic of locations, but the street it was on was called Love Street.

They've been working incredibly hard during the coronavirus pandemic, cooking and delivering over 16,000 meals for the NHS, emergency services and people who were self-isolating, in the North West.

And all the while Jill was working full-time in as a Civil Servant.

Phil got the tickets to the cricket match as a thank you to Jill for all her help with the food deliveries over the last few months.

But the proposal plan had been in the works for a while as Phil knew his partner would expect him to do something special when the time came to get down on one knee.

"We joked about it for the last 18 months, we saw a few proposals on social media, Jill said you better do better than that," Phil said.

"She loves cricket so I thought…Why not?!

"People all over the world have congratulated us, sending messages. We even made it to a local North West News channel."

Do you have a heartwarming story to share? We want to hear all about it. Email us at yourmirror@mirror.co.uk

Previous : Brief, widespread outage for numerous websites
Next : ‘Memoir once again shows hypocrite Harry is living in a world of his own with Meghan’ – Rachael Bletchly