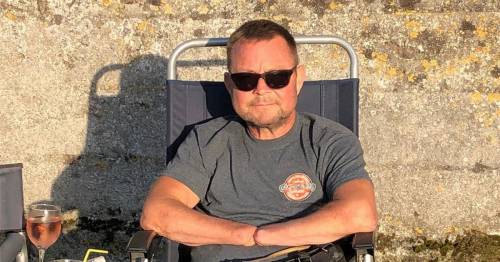 A quadruple amputee got to hold a pint in his hand and play pool for the first time in five years thanks to a new futuristic bionic arm made using 3D printing.

Michael White, 55, lost all four limbs due to a rare inflammatory condition, but was able to take a sip of ice cold beer thanks to his new robotic limbs.

He was diagnosed with Bechet's syndrome and between 2012 and 2017 he had to undergo around 30 operations that meant doctors had to amputate both his legs and hands.

His condition was causing him so much pain that he begged medics to cut off his hands.

"In the end, I begged them to take my hands off, because any small cut would just make them go black, they were dying and the pain was excruciating," he said.

He underwent surgery after being diagnosed with Bechet’s syndrome
(

"With my NHS prescribed cosmetic arm, I can't pick things up. If I go down the pub, now with my bionic arm I will be able to hold a pint."

Mr White has battled back and is using the state-of-the art technology to also mow the lawn and carry out carry out other everyday tasks.

The former gardener, from Fleet, Hampshire, was initially fitted with NHS cosmetic arms but he was unable to pick up objects.

Unlike his other prostheses, the new arm connects the bionic limb directly to his brain so precise sensations can be picked up by the device and create natural movements.

These signals are then amplified and converted into hand movements in the bionic limb. The custom-built arm was made using 3D printing to better fit his body, experts said.

Mr White was fitted with a new 'Hero Arm' device as it is called, just in time for his 55th birthday, so he could go down the pub with his family to celebrate.

When asked what was the first thing he was going to do with his new arm, he said he was looking forward to celebrating his birthday with a game of pool down the local pub in Fleet, Hampshire, and being able to hold a cue.

He was able to pot balls and use the cue just as before.

Mr White said: "I was looking for something that was functional and that looked cool and to see if it would make my life easier and a little bit less frustrating.

"I didn't want to be sat at home, being waited on hand and foot. I've always been an independent person.

There's things that I want to do with my family. I should be able to hold a pool cue."

While it has been seven years since the amputations, Michael is still working to get back to some form of normality as he would still like to be able to go fishing, he said.

Mr White added: "Before the amputations, I was always an independent person. There are still so many things I really want to do, simple hobbies like going fishing and being able to hold a fishing rod.

"It's going to be so great now to be able to hold my phone and still be able to pick something up.

"I'll be able to do it with two hands rather than trying to put stuff under my armpit or hold it with my teeth.

"When your an able-bodied person you say 'oh, I've got to work'. But I really look forward to being able to go to work.

"Amputees need to help other amputees – there's light at the end of the tunnel. Persevere and keep a positive mental attitude, be determined, because you can do it. "

After a consultation to fit the arm with an upper limb prosthetist at Open Bionics that makes the bionic limb, Michael was able to pick up fruit, bags, and many other items in both hands.

He was able to pay for the bespoke arm that was custom made to his shape and person design specification thanks to a crowdfunding campaign.

Makers Open Bionics said the firm is on a mission to help patients like Mr White to "turn their disabilities into superpowers".

Samantha Payne MBE, co-founder of Open Bionics, said: "Michael has been on an exceptional journey to regain functionality and independence since his amputations.

"We are so pleased to see Michael be able to enjoy some more of his favourite hobbies with the use of the Hero Arm."

The company uses innovative technologies such as 3D printing and 3D scanning so that each 'Hero Arm' is custom-built to each user's body.

Previous : How this First Nation was swindled out of its land — and into a flood zone
Next : Man arrested and murder probe launched after man seen falling from ‘top floor’ window