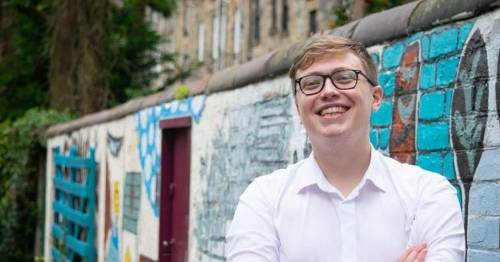 A man who was forced to undergo conversion therapy is calling for the practice to be ruled illegal immediately.

Blair Anderson, from Glasgow, was only 14 when he underwent gay conversion therapy after coming out to his religious family, reports Daily Record.

From then on he suffered years of intimate, non-physical abuse from someone who aimed to cure his homosexuality.

Now Blair – who was left traumatised and suicidal by his treatment – is urging the Scottish Government to criminalise the treatment.

The now 23-year-old still reaps the effects of his distressing experience as he still ‘wakes up in the night screaming’.

Conversion therapy involves an attempt to turn an individual's sexual orientation to heterosexual.

He was constantly reminded by his family they would ‘watch him being tortured in hell’ if he ever thought to publicly reveal his sexuality while being forced to read the bible as a 'cure'.

Image:
Blair Anderson was 14 when he told his religious family he was gay and from them on he endured years of intimate, non-physical abuse from someone who intended to 'cure' his homosexuality)

Blair, who is a Scottish Green Party member, was the conversion therapy tactics to be banned to ensure no one else goes through what he went through which left him dealing with PTSD.

It comes as The Scottish Government has committed to introducing legislation by the end of 2023 which will end conversion practices as comprehensively as possible within devolved powers.

Blair said: "I think conversion therapy should be a criminal offence because it is wrong and left me feeling suicidal.

“I have been diagnosed with PTSD and take medication to cope with my past as well as cutting off my family completely.

“I was threatened as my family said my gran would die if I came out of the closet and was forced to pray to ‘fix me’ which was horrible.

“I still wake up in the night screaming from nightmares because of the experience, so I don’t want anyone else to go through it.

“The Scottish Government is going to bring a bill around by at least 2023 which could see the treatment I suffered become illegal.

“If this legislation had been around when I was younger I would have felt less alone and known what my family were doing was wrong."

Blair revealed how his upbringing in a strict Christian household left him ashamed and frustrated with his own sexuality – ultimately being forced to move out and escape at just 18 years old.

Image:
Blair revealed how his upbringing in a strict Christian household left him ashamed and frustrated with his own sexuality)

Now he wants to raise awareness that conversion practices ‘don’t come in one form’ and are more common than most people realise.

He explained: “Conversion practices aren’t just one type of ‘therapy’ it comes in all different ways and is a much bigger problem in Scotland than most people realise.

“For me it was all behind closed doors and in secret, my family isolating me and forcing me to suppress myself through religion.

“It isn’t just electroshock therapy or gay summer camps like most people think, it is any act of making someone try to change their sexuality.

“Having a law introduced by the Scottish Government would highlight the issue and let people understand that conversion therapy isn’t an outdated practice that doesn’t exist anymore, it is still a problem and this would address it.”

Blair now works with an End Conversion Therapy movement with others who share similar experiences.

They aim to work with the Scottish Government to ensure the practice of conversion therapy is no longer allowed.

It is anticipated the expert advisory group will begin its work early next year and this, alongside recommendations from the Equalities, Human Rights and Civil Justice Committee and other evidence and research, will inform the Scottish Government’s approach.

Social Justice Secretary Shona Robison said: “We are clear about the need to end conversion practices in Scotland – ensuring that everyone, regardless of their sexual orientation or gender identity, is safe from them. These practices are harmful, discriminatory, and have no place in our society.

“Work is now underway to establish an expert advisory group on banning conversion therapy and its remit will include recommending an agreed definition of conversion practices.

“We will explore how legislation can best protect and support those who need it, while ensuring that freedoms – including freedoms of speech, religion, and belief – are safeguarded.