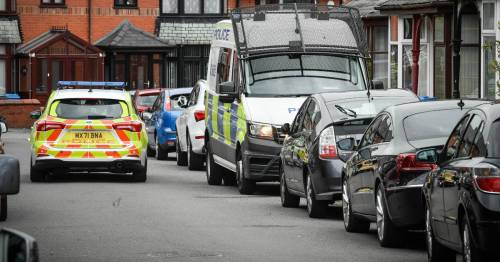 A man was rushed to the hospital suffering from burns last night following a suspected acid attack.

Greater Manchester Police raced to the scene at an address in Oldham shortly before 10.40pm.

His injuries are not believed to be life-threatening and he is in a stable condition.

A police investigation is underway and no arrests have been made.

Reports on social media about the hospital's A&E department being closed due to the incident were rubbished by a Northern Care Alliance NHS Foundation Trust spokesperson.

Police were called to the incident at an address on Burlington Avenue shortly before 10.40pm last night
(

They added that a deep clean and contamination had been carried out and there was no risk to staff or members of the public.

It is understood a number of staff members at the hospital have been isolated as a precaution.

A spokesperson for Greater Manchester Police said: "Shortly before 10.40pm on Wednesday 11 May we were called by NWAS to a report of a man being attacked with a substance suspected of being acid at an address on Burlington Avenue, Oldham.

"A man in his 30s was taken to hospital with injuries consistent with burns and he remains in a stable condition.

"An investigation is underway and our enquiries into the incident are ongoing. No arrests have been made.

"The patient is currently being treated in hospital for burns where their condition is being monitored.

“I would like to thank our teams who have worked well with colleagues in our partner agencies in dealing with this incident professionally and safely in line with our robust and tried and tested plans.

"All patients at our Emergency Department are safe and there is no risk to staff and the public following a deep clean and decontamination of the department”.

Anyone with information is urged to contact GMP online via our LiveChat facility, if able, or by calling 101 quoting incident 3391 of 11/05/2022.

Details can be passed anonymously to the independent charity Crimestoppers on 0800 555 111.

Previous : Alabama shipwreck holds key for kin of enslaved Africans
Next : DeafBlind Communities May Be Creating a New Language of Touch