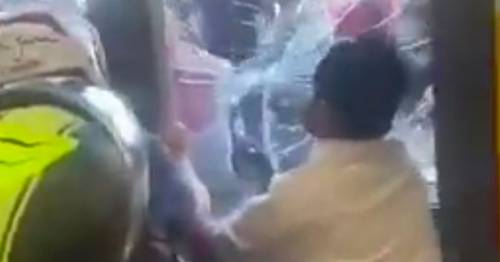 Staff were filmed looking on in terror as a man smashed in the door of a McDonald's in West London yesterday.

Footage shows a worker teaming up with delivery drivers to keep the exit door closed as a brawl erupts outside.

He says: "I can't lock it when it's being pulled too hard", adding: "Why are they fighting? Why are they here?"

A man is later seen kicking and flinging a large object at the already smashed glass pane of the door, while workers inside back away in fear for their safety.

The incident took place at a branch's delivery kitchen in Twickenham, Feltham around 4pm on Tuesday, said the fast food chain.

The Metropolitan Police confirmed that officers attended and found a man aged in his 20s with a non life-threatening head injury.

Do you know more about this story? Email katie.weston@reachplc.com

A 16-year-old boy has been arrested and remains in custody while enquiries continue, the force added.

Towards the start of the video, a group of around eight people gather outside as a woman repeatedly yells: "Get over there."

They appear to leave with a delivery driver saying: "They're running away".

A frightened worker then warns: "Stand back from the door, you don't know what they're going to do", as two people return to the area.

One man proceeds to boot in the door, with the sound of crunching glass heard as the couriers spring backwards in surprise.

The incident took place at a delivery kitchen in Twickenham, Feltham around 4pm yesterday

He then throws a large, square object towards the pane while one person yells: "Where is the police?"

A delivery driver holds a phone up to his ear as three girls approach the door and demand: "Get out here, come out."

The circumstances that led up to the incident have not yet been made clear.

A Met Police spokesman told The Mirror: "Police were called at 16:20hrs on Tuesday, 21 June to reports of a group of people fighting at a restaurant in Hampton Road West, Feltham.

"Officers attended and found a man aged in his 20s with a head injury. His condition was not life-threatening.

One man proceeds to boot in the door, with the sound of crunching glass heard as the delivery drivers spring backwards

"A 16-year-old boy was arrested at the scene on suspicion of being in possession of an offensive weapon and affray. He remains in custody while enquiries continue."

A spokesperson for McDonald's added: "We are aware of the incident which took place at our Hanworth delivery kitchen yesterday.

"The safety of our crew and our delivery partners is of paramount importance to us and we are supporting those involved.

"The police were called and we continue to assist them in their investigations.”