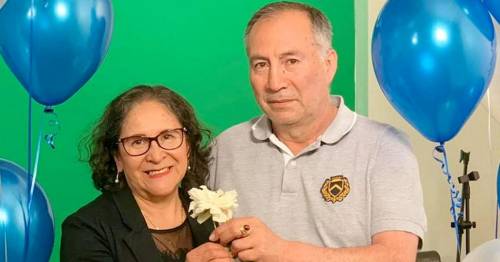 A man stabbed a husband and wife to death and left them in a pool of their own blood after a row over a new fridge, a court heard.

Daniel Briceno-Garcia, 46, knifed his landlord Edgar Aguilera Daza, 60, and his wife Sonia Butron Calvi, 66, at the home at the start of the first Covid lockdown in 2020.

A jury at the Old Bailey heard in the week before the murders, Briceno-Garcia had argued with Sonia over the purchase of a new fridge, and she had complained of his “bad mood”.

During the attack on April 1 he stabbed Edgar several times in his stomach before killing his wife in Stockwell, London.

Afterwards he called police six times and was arrested at the scene.

Police at the scene on Dorset Road in Stockwell, London in April 2020
(

Tom Little QC, prosecuting, said: “What the police found at the property can only be described as a bloodbath.

“This is a case involving not one, but two violent deaths at the hands of this defendant which arose during the same incident right at the beginning of the first Covid lockdown in April 2020.

“There is now no dispute or issue as the Judge has directed you, that it was the defendant that killed both of the victims and that he did so by stabbing them, stabbing them repeatedly with a knife.

“Other witnesses describe that the defendant had become concerned, even paranoid, about the risk that Covid was going to pose and was concerned about that in the property.

“That you may think is understandable. It is quite another thing to react to the risks Covid poses with the use of a knife.”

The defendant had lived with the couple and a number of other people in a maisonette property on Dorset Road.

All of the six occupants were Spanish speakers, and were “keeping themselves to themselves” in the period ahead of the murder, due to the new Covid-19 lockdown restrictions.

On their arrival at the home police and paramedics attempted to administer first aid but they were both pronounced dead at the scene, with both having sustained fatal stab wounds

Following the attack, all were arrested as police started their investigations.

During an inspection of the defendant’s bedroom, the murder weapon was found on his bed and a whiteboard containing a reference to Covid-19 was discovered.

“She was also surrounded by a large pool of blood.”

After he arrived at Brixton Police Station, the defendant was assisted by a Spanish interpreter but refused to answer questions asked by the custody nurse.

He was described as being “hostile and uncooperative”, and refused to provide blood toxicology samples. During his police interview on April 2, he remained silent in response to all questions and made no reply when he was charged with murder.

However, he later told psychiatrists that he thought his landlords were “trying to kill him” and that he had been “hearing voices”. He similarly claimed that his fellow tenants were “both psychologically and physically violent to him in order to obtain money and other items”.

“He claimed that they would intimidate him by striking him and cutting him with a small knife. The prosecution says there is no truth in that and that these are lies that he has subsequently made up to try to support a partial defence of diminished responsibility,” Mr Little QC said.

Daniel Briceno-Garcia, of Stockwell, has denied two counts of murder, but has pleaded guilty to two charges of manslaughter. The trial continues.

Previous : Rare white deer native to Europe pops up in rural south Ottawa
Next : Football fans plan to fly hot air balloon to Spain because flights cost too much