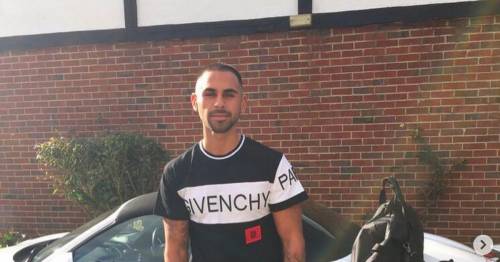 A man who confronted a love rival outside a Marks and Spencer went on to murder a dad-of-two by running him over, a jury has heard.

Shaan Mir, 27, from Weybridge, has denied the murder of Matthew 'Tik' Tester, 49, following a confrontation at a Walton-on-Thames Marks & Spencer car park on April 22.

He is also accused of attempting to kill Lee 'Snake' Waring, 48, after the love rival row.

At the opening of the trial at Guildford Crown Court yesterday, Prosecutor Philip Bennetts told jurors that Mir had been brewing an anger regarding his ex-girlfriend for some time.

He blamed Stephen Butler, who was also a former lover of his girlfriend, Ilze Shoeman, for their break up.

After a series of aggressive Instagram messages, Mir and Mr Butler arranged to meet to discuss in person.

But Mr Butler brought along his two scaffolding colleagues as a precaution, victims Mr Tester and Mr Waring.

It was during the summit that Mir's anger boiled over, and he "repeatedly" ran over the two men, killing one and seriously injured the other, a court has heard.

Mr Bennetts argued that what happened after the car incident, showed Mir to be "quite a persuasive liar".

The 27-year-old changed his clothes and appearance by shaving his head and facial hair, Mr Bennetts said.

Among the messages that provoked the meeting, was one bizarre exchange, in which Mir told Mr Butler that their ex-girlfriend had said he was "heartbroken" when they ended their relationship.

Now a witness in the murder trial, Mr Butler denied he ever felt that way.

Mir then messaged Mr Butler's girlfriend, Chloe Wells, and told her "apparently you were second best".

It was Mr Butler who Mir blamed for his split with Ms Shoeman after their 18-month relationship.

Mir and Mr Butler were due to hold a summit about the situation outside the Marks & Spencer store on the afternoon of the murder.

But Mr Butler brought along his scaffolding colleagues, Mr Tester and Mr Waring, in case of trouble.

Mr Butler told the court how when he arrived, Mir got out of his car with his fists clenched. Mr Butler claims he hit him to avoid being hit himself.

When Mir was hit, he fell to the ground, before climbing into his car and driving straight into father-of-two Mr Tester and Mr Waring, killing the former.

As he reversed the car back "repeatedly" over the men he shouted out, "You're not so f*****g hard now are you" – a reference to the previous confrontation.

He then sped off in his car – which he later disposed of while making the changes to disguise his appearance.

He later sent a text message to Butler, saying 'glad all could be dealt with in a civil manner'."

Despite the efforts of paramedics, Mr Tester died at the scene from a head injury, a post-mortem confirmed.

Mr Waring was treated at the scene and then taken to hospital for further treatment, with multiples abrasions to the face, wounds to the chin and injuries to the chest.

When cops apprehended Mir, he claimed his car was stolen and told them he was "baffled" by the arrest.

He said to the officers:"My car has been stolen and you're arresting me for murder? You lot are off your heads."

At the time of the attack, neighbours revealed Mr Tester, an avid scooter enthusiast, was a family man devoted to his two teenage daughters, Maddy and Pippa.

"Matthew was a really nice, hard-working family man. He ran a scaffolding company and his wife Kim does the books. They have twin daughters who are in their teens. Everyone is so shocked, I just feel so sorry for Kim and the girls."

Previous : When is Thanksgiving 2021? Meaning behind US holiday and how it’s celebrated
Next : Killer who stabbed and ran over partner after eating weed brownie jailed for 8 years