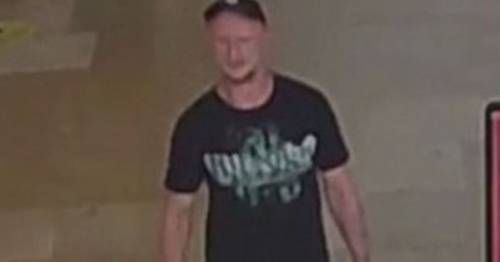 A man who killed his friend with a paving slab then used the victim’s money to go on a gambling and drinking spree has been jailed.

Lukas Domeradzki has been jailed today for the murder of Sebastian Zygmunt, who was found with serious head injuries at his home in Solihull.

Police used CCTV, forensics and tracked mobile phone movements to prove he killed 26-year-old Sebastian, who was also known as Seba, and then tried to carry on as if nothing had happened.

He took thousands of pounds of the victim's money and then spent the rest of the day at various bookmakers, buying clothes and beer.

He also deceived Seba's girlfriend, who was worried when she couldn't get in contact with her partner, into believing he was still alive.

He first messaged her from the victim's mobile phone and then contacted her himself claiming a friend had informed him Seba was asleep.

The killer and victim had been at another friend's home the evening before the murder on 7 June last year where it's understood drugs were used.

Domeradzki – who’s known to abuse amphetamine and admitted in interview to having been under the influence on the day the victim was found – then returned with Seba to his home the next morning.

He was seen leaving and locking the address at around 10.10am – less than an hour-and-a-half later.

Domeradzki was wearing Seba's t-shirt, trainers and carrying his holdall which contained the deceased's mobile phone.

He'd also taken £2,000 in cash which was a combination of notes and coins which the victim had been saving up for a holiday.

Police identified 35-year-old Domeradzki as the prime suspect and he was arrested within days.

CCTV from neighbouring properties showed Domeradzki go into the back garden at around 9.50am and, although it's not clear on the footage, police believe this to be when the paving slab was picked up.

The blood-stained slab was found near to Seba's body, discovered in the conservatory at around 6.10pm, and subsequent analysis revealed Domeradzki's DNA was on it.

He immediately went to a bookmakers in Olton, then bought beer and took a train into Birmingham city centre where he bought sports clothes and visited another bookies before heading home.

In the meantime others close to Seba had started to grow concerned as they couldn't get hold of him.

Domeradzki had sent a message to the victim's girlfriend from Seba's phone in an attempt to throw them off the scent, but this only sparked further suspicion as the content was not what she would typically expect her partner to respond with.

Domeradzki also slipped up by speaking to a mutual friend and claiming "they had killed him," however this was half an hour before the body was discovered.

At the bookmakers following the murder
(

Seba's injuries were consistent with being repeatedly struck with a blunt object.

The killer was convicted of murder following a trial at Birmingham Crown Court and was today sentenced to a minimum of 30 years imprisonment.

Detective Inspector Jim Mahon, from our homicide unit and who led the investigation, said: "This is the tragic death of a young man who had his life ahead of him.

"Domeradzki – who we believe was likely to be under the influence of drink and drugs – saw Seba and his money as an easy target.

"He took the opportunity to kill him, steal his property and money, and then go on a gambling spree. He was deceitful in trying to cover up his actions and lied following his arrest.

"But he was caught out by a combination of phone evidence, CCTV, DNA and the hard work of my team.

"This conviction can never compensate for the loss of Seba, but we hope the fact his killer is going to prison for a long time will be of some comfort to his loved ones."

Previous : ‘I saved £30,000 for my first home but still couldn’t get on the property ladder’
Next : Boy kicked out of school for hurling vile four-letter insult at female teacher