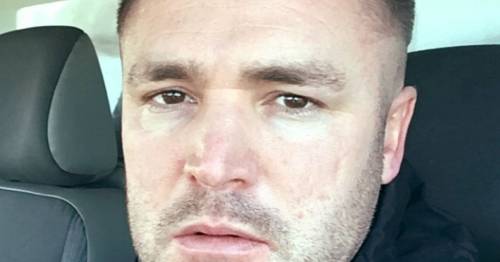 A man says he suffered a nasty case of food poisoning after eating a pork scratching as part of a Thai meal.

Sebastian Thornton, 37, said he had diarrhoea and cold sweats after eating the crunchy snack.

He believes the rogue treat came from a packet of pub-favourite Mr Porky.

Thousands of the savoury rinds were recalled due to salmonella concerns.

Sebastian, a self-employed joiner, was struck with fever, fatigue and even passed blood following the July 1 meal.

Sebastian said he was hospitalised for two days
(

He was hospitalised between July 4 and July 6 and was diagnosed with salmonella.

He was given antibiotics but said his illness persisted for around six weeks.

Sebastian, from Malton, Yorkshire, said: "By the time I heard about the recall I'd already eaten the pork scratchings.

"Within a few days I felt awful.

"The impact of my illness lasted for around six weeks so I wasn't able to work during that time."

Public health experts urged people not to eat the snack, which is produced by Tayto Group Ltd in a Bolton factory, with a best-before date up to February 2022.

Legal firm Irwin Mitchell is now leading a probe into Tayto Group, which is known as Britain's largest snack provider.

Jatinder Paul, a public health lawyer at Irwin Mitchell, said: "We're extremely concerned to hear of the symptoms our clients have suffered after consuming pork scratchings.

"Salmonella is a very serious bacterial infection which can often lead to ongoing and long-lasting health problems.

"We're aware of a large number of individuals who say they have been affected by this outbreak and we would be interested in speaking to anyone who may have been impacted by this incident who would be able to assist with our investigations.

"While we welcome the product recall, we're now investigating further in order to provide our clients with the answers they deserve.

"It's also vital that, where appropriate, lessons are learned to improve food hygiene standards."

A spokesman for the Tayto Group has said: "The safety of our products is of the utmost importance, which is why we have taken the decision to initiate a precautionary recall for some products.

"We are working closely with the local environmental health team and the FSA at this time."

Previous : Buffett-backed Nubank turns a profit in Brazil
Next : ‘Worst cold ever’ sweeping the UK as expert shares what is to blame for surging cases