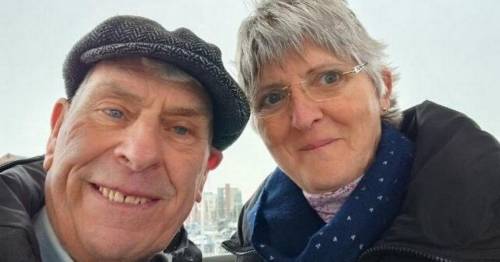 A man has told how a hearing test at a Boots store led to the early discovery of lymphoma in his nasal cavity.

John Newby, 72, a former online manager for BP, received the all-clear from Castle Hill Hospital in September, bringing an end to a 13-month journey from when he initially thought he was losing his hearing in one ear.

After his wife encouraged him to see a specialist, he booked in for an initial hearing consultation at a Boots in Hull in August 2020 and was told to do a second test.

John told Hull Live: “It was a complete test and from that, [the specialist] told me she thought it’d be wise for me to go and see my doctor.

“She wrote the referral, passed on the details of the tests, and I passed that on to my GP surgery. That was the start, really, of what was to come.”

John's wife JUlie had encouraged him to see a specialist

From there, John was referred to an otorhinolaryngologist, a specialist in nose and throat, at Castle Hill in November. By this point, he was also showing symptoms of glue ear, a condition that occurs when the middle part of the ear fills with fluid and has nowhere to drain.

John was pencilled in for a biopsy and scan towards the end of the month. The results of those tests were stark and he was informed about the discovery of lymphoma in his nasal cavity a week before Christmas.

He said: “I was reassured that the diagnosis was curable – a risk, but being a reasonably fit and healthy man, I should get a positive outcome. It wasn’t all doom and gloom.

“Due to the lymphoma’s location, it was impossible to operate on it and, instead, I would need to go through two rounds of chemotherapy as well as a round of radiotherapy to get rid of it.

“The diagnosis, for many reasons, couldn’t have come at a worse time. We were in the middle of another lockdown and Christmas was just a week away. I didn’t tell anybody about it until after the New Year.

“We’ve also seen on the news how many people have been put on waiting lists for diagnosis and treatment, I feel incredibly blessed and lucky to have been seen so quickly.”

From finding out about the lymphoma before Christmas, John began chemotherapy on January 22, the day of his 72nd birthday, and completed his treatment in early June.

After three months of anxiously waiting, he was given the all-clear on September 10.

John said: “I was told by the consultant that they suspect it won’t come back, but I will be monitored. If it hadn’t been for the hearing test – if I had just left it, as so many people do – what would the outcome have been?”

Having had time to reflect and thank the necessary people at the core of his recovery, John had a final message for anyone that finds themselves in a similar situation to what he did 13 months ago.

“If you have got anything wrong with your hearing, there are people out there waiting to help,” John said.

“The best thing to do is to just get it checked out. It’s a must. You only have your hearing once and as soon as it starts to go, it can cause problems. As was the case with me, it showed there was something entirely different going off to what I thought.

“Finding my cancer was a lifesaver and I can’t thank Nicola and the team at Boots Hearingcare enough for the swift action they took to get me checked out. Without that, I may have found myself in a worse state of health.”

Nicola Hassall, the Boots audiologist who carried out John's hearing test, said: “I would encourage everyone to have regular hearing health checks to make sure they look after their ears and their hearing.

“I'm glad that Mr Newby saw me when he did and that I was able to help and encourage him to see his GP.”