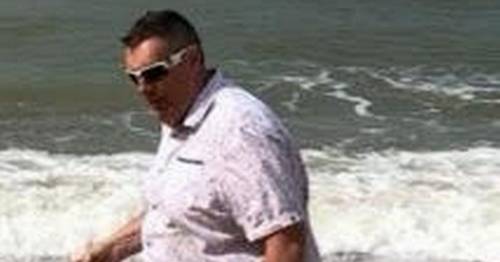 A man who struggled to do everyday tasks without getting out of breath has shed a huge seven stone and cut 10 inches off his waist after ditching pizza and pies.

Ian Robertson, from Silloth, Cumbria, tipped the scales at 22 stone 1lb when he decided to bite the bullet and sign up to Slimming World in 2018.

And now he's been named Mr Sleek 2021 and shedding a third of his body weight and keeping it off for nearly two years, LancsLive reports.

By March 2020 Ian had dropped to 14 stone 13lb after losing as much as superstar Adele who also underwent a stunning transformation.

Ian Robertson, from Silloth, after he lost a staggering seven stone

Ian is a member of the Carlisle United FC, Sunset Suite Slimming World group which he attends every Thursday.

He said: "Obviously, the starting point for any weight loss journey is that you want to get there for yourself.

"The support and advice given by Emma in her groups makes the whole process so much easier. I reached my target of a 7st 2lb weight loss within two years and have now maintained it for approaching another two years.

"Without the class, I'd almost certainly be back where I started. Even during lockdown, the virtual groups were there to keep the motivation going. And the best bit about group is that it's a lot of fun.”

Ian went from 22 stone 1lb to 14 stone 13lb and is extremely proud of his achievement and joined the group run by Emma Davies in Carlisle in 2018.

He continued: "I’m proud of being a loser when it feels this good I feel like a new man since losing weight – in fact, I look so different that people who I haven’t seen me for a while often can’t believe I’m the same person.

"I have to say though, it’s the change on the inside that’s been the greatest – I’m happier, healthier and much more confident now.

"My weight impacted on so many aspects of my life, from struggling to find clothes that I like to fit to not being able to do simple everyday tasks without feeling tired and out of breath. Before I lost the weight I just existed, now I’m full of life and can do so much more."

Ian's weight was also putting a huge strain on his health and he felt "everything was a real effort."

He added: "I was nervous when I first walked through the doors at my group; I was embarrassed about my size and scared that I might be the biggest person there and the only man.

"I needn’t have worried though, everyone there was so friendly especially my consultant Emma and I was so relieved when I found out that my weight was confidential – I’d had visions of having to tell everyone how much I weighed.

“I’ve made so many friends at the group and I honestly don’t think I could have done it without their support each week. We all support each other with recipes and tips and if anyone is ever struggling, we are always there to remind each other how far we’ve come.”

Ian’s lost a total of 7st 2lb and gone from a size 44” waist to a size 34/36”. He’s also more active nowadays and regularly plays squash and goes cycling too.

Emma, who runs the Sunset Suite Slimming World group at Carlisle United FC every Thursday, said: “I feel so privileged to have played a part in Ian’s transformation. Watching him blossom each week has been wonderful and I hope his success will inspire other people in Carlisle who’d like to lose weight and become happier and healthier to take action. There’s always a warm welcome waiting at Slimming World."